For a father's day gift, my daughter gave me The Metamorphosis by Franz Kafka, written in 1915. I'm starting it right away.
Gary

See how you feel about it in the morning!
"Je n'ai pas besoin de cette hypothèse."
Pierre-Simon de Laplace
Top

I had no idea what to expect. This is a 55 page 1915 comical science fiction tale, the first half of which was one of the funniest descriptions of a guy who woke up and found he had become a bug. In some places, as I imagined the antics, I was laughing so hard I couldn't see the pages. I love funny literature, which minds me of several of Mark Twain's books. This would have been a great sketch for a comedy show. The last half is just about the family of the bug guy trying to cope with it all, and how he lived under the couch, crawled on the walls and ceiling, and quickly became ill and thankfully died, putting himself and his family out of their ridiculous misery. The stupid thing about it - the paperback (including the actual book) is a whopping 194 pages of egghead philosophy that's been gathered over a hundred years. Pretentious drivel such as - what was the symbolism of a giant cockroach shouting in bug language at his panicky family, which only scared them much more. I read all 55 pages and not one more, other than scanning to see why the book is so long. I told my daughter I really enjoyed what I had read of it.
Gary

I did make a mental note to check out his Amerika one of these days.

Edit: I've decided to avoid literature that makes me feel negative or distressed. For that reason I'm done with Kafka. Got plenty of that already. I do give Kafka my sincere admiration for his funny story that made me laugh to the point there were tears.
PS: I've used the wrong word - this is fantasy, not mere science fiction. Kafka must have been decades before his time.
Gary

a gentleman in moscow

Rereading Nobody Knows My Name by James Baldwin, an excellent collection of essays.

Reading Who Ate the First Oyster? for some light fun pop history.

Reading Zora Neale Hurston's short stories in search of some to use with my students.
Regards,
Tim

Why should we not meet, not always as dyspeptics, to tell our bad dreams, but sometimes as eupeptics, to congratulate each other on the ever-glorious morning? - Henry David Thoreau
Top

I'm rotting my mind with fantasy: When Dragons Rage (DragonCrown War Cycle) in paperback and Of Limited Loyalty (Crown Colonies series) on Adobe digital, both by Michael Stackpole.
_______
John
Top

I really enjoyed that book. Hope you do too!
Jim
Top

I really enjoyed that book. Hope you do too!

Seeing the consensus on Gentleman in Moscow, I'm also reading this one now.
Gary

The Annals of Imperial Rome by Cornelius Tacitus. 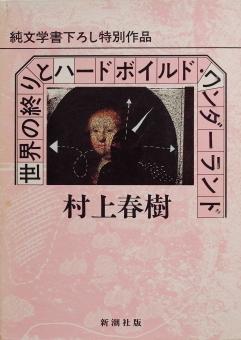 Still working on it.
My problem is that I don't start reading until I go to bed.
Then I fall asleep after a page or three.
That's why I like the Kobo e-reader - it remembers where I was, and shuts off after a few minutes.
It won't take my glasses off though.

A useful name is "Speculative Fiction", or "SpecFic". It covers a wide range of science fiction, fantasy, alternate history, etc.
"If this isn't nice, then what is?" - Kurt Vonnegut's Uncle Alex
Top

So John, isn't all fiction speculative?

Only 30 pages to go with Hard-Boiled Wonderland and the End of the World.
It's just now starting to make something like sense.

I'm finding that with Murakami novels there is little hint of any particular outcome that you might be rooting for. You just sort of get carried along.
"If this isn't nice, then what is?" - Kurt Vonnegut's Uncle Alex
Top

I'm finding myself avoiding the end of The Mirror and the Light, as I know what must happen to Thomas Cromwell. Hilary Mantel has made him a sympathetic and likeable character and I don't quite want to think about his head being chopped off. No doubt I'll be brave and get through it, but in readiness I have decided to absorb some more historical wisdom from Niall Ferguson, with Civilization: The West and the Rest, The Square and the Tower: Networks and Power, from the Freemasons to Facebook, and Empire: The Rise and Demise of the British World Order and the Lessons for Global Power all now waiting to be read. They might also make suitably dense tomes if I get the call for the expected two month admission. Ferguson's The Pity of War taught me much about the Great War that I had not appreciated.

The other thing I'm weighing up reading is this: Prester John by John Buchan. I know, no one reads John Buchan anymore. In 1976 I went for an interview at King's College Hospital when applying to medical school. "What are you reading at the moment?" asked one of the panel of stuffed shirts. "John MacNab by John Buchan" I replied quite honestly. "Ha! No one reads Buchan nowadays!" came the reply with a perfectly obvious tone of disbelief. "I do" said a small voice. They offered me three C's at A-level, which is like an open door, but I already had the same offer from UCH, the Middlesex Hospital and Bristol University. I was offended, so I declined their offer and went to UCH when I got three A's. Back to Prester John. My father, whom I loved dearly, kept on recommending I read it. Presumably he had read and enjoyed it as a youngster and wanted to share his enjoyment. I had read most of Buchan's oeuvre by that time, but simply because he was pushy I chose to refuse. And so it went - have you a book to read? Prester John is good. No, thanks. It was a fun game in which he recommended it and I refused, just because I could. But 21 years ago he died, and I have not yet opened the dilapidated copy of Prester John. Now I'm becoming more aware that I have a choice. Read it or not. If I read it, I'm giving up on the old game of opposition, which is to say, I'm admitting in this peculiar way what is already obvious: he's dead and there is no point in continuing the game. It's also true that for each year and decade I declined to read it, it has grown in its mythic proportions. It became a better book each time I declined to read it. But shall I read it now and discover it isn't that good? There's no good reason to think it will be better than any other Buchan book, which are decent rollicking novels of evil colonialism and empire although the protagonists are upright, honest, brave fellows who do the right thing as they see it (and were perfectly justified by the lights of their age)? I think I'm brave enough. He's dead. He was wrong about some things. The book may stink. I shall cope.

By the way, John MacNab is worth reading by anyone today. As Amazon puts it:

In 1925, John Buchan published his second most famous novel, John Macnab; three high-flying men - a barrister, a cabinet minister and a banker - are suffering from boredom. They concoct a plan to cure it. They inform three Scottish estates that they will poach from each two stags and a salmon in a given time. They sign collectively as 'John McNab' and await the responses. This novel is a light interlude within the "Leithen Stories" series - an evocative look at the hunting, shooting and fishing lifestyle in Highland Scotland.

The woodcraft and stalking reminded me of a seminal novel of my childhood, Brendon Chase. But 'BB' and his tales are another story.
"Je n'ai pas besoin de cette hypothèse."
Pierre-Simon de Laplace
Top
Post Reply
1267 posts