Need help with a process of wetshaving? Wanna see pics or videos? Here is your Mecca!
Post Reply
4 posts • Page 1 of 1

I might be wrong, as such an outrage has been known to happen, but I don't think I posted this photo here before now (Leica M2, Summilux 50 ASPH, Ilford XP2 Super, ISO 800, Ilfotec HC, Hasselblad X1 scan): 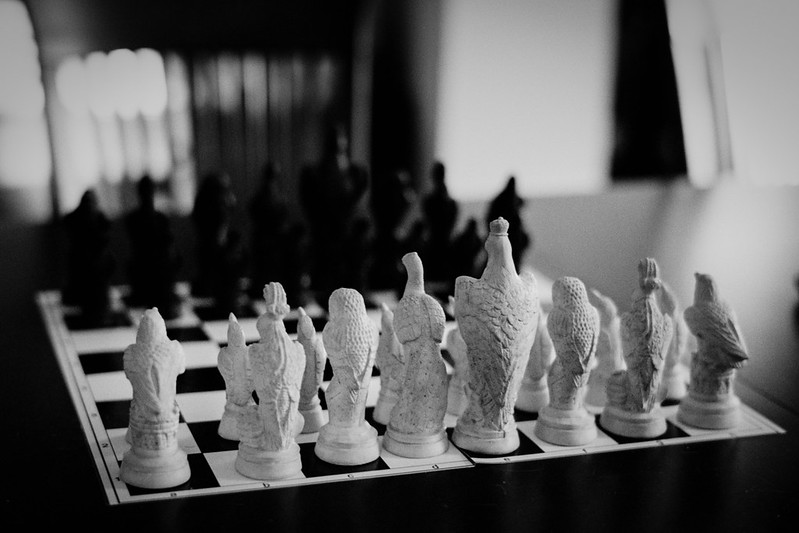 My son had just left after a Christmas holiday at home during which I had refreshed his knowledge of chess and got out a set I cast from gypsum in the late 1970's. All the pieces are birds, and are coloured with black shoe polish, or just plain beeswax. I was sad that I had no one to play with. But the little tyke has just started playing long distance chess with me by text message. "Pawn to e4" came the message this morning. I'll show him who's boss: pawn to e5 was my reply. We'll see.
"Je n'ai pas besoin de cette hypothèse."
Pierre-Simon de Laplace
Top

When I was a teen I played a lot. I even bought a custom set with it's own table and common ceramic pieces set. It was beautiful, like yours.

I hope you get many more years of enjoyment out of it.

I'm glad that your son's playing the game with you now. Oh, and I hope he gives you a serious challenge for victory!

At 11 or 12 I started trying to learn chess with one of my schoolmates. It was as basic as one gets when there's no mentor. Soon I learned I had a very cool uncle who was, by his own standards, quite good at the game. A couple of times we tried to play, but I was so chess-illiterate, when he started by telling me his next move would be a series of moves with a name, and I was intimidated and disgusted so I just told him I didn't want to learn anymore. My loss, I suppose, but a part of me was very sad that there was much too large a gap between his technical approach to teaching and my unsophisticated baby steps.
Gary

As always, Chris -- great post and wonderful story telling with the picture. Nothing like beskpoke chess sets. I have a bespoke Isle of Lewis set I have made specifically for me from a crafter in Skye from crushed Isle of Skye stone and resin with a matching table. I got them to include a set of draughts as well for our young grandchildren. We've had it for about 15 years now -- and it's a special set for sure.
Wendell