Top of the morning to ya! Post pics and descriptions of your daily shaving gear and accessories!
Post Reply
183 posts

2clfrwrds wrote:Richard, I really appreciate the consideration shown in your reply. Yes, the picture you posted was kinda boring, but I would ask, did you use Trumper's Limes AND Booster Lanolin? How did that work?!

I'm concerned that it sounds like you're saying, Don't anyone post any more lists because none of the cool kids read them (um, actually I do), and don't take "reality" photos because they're boring. In fact, I loved Bargepole's casual photo of his bathroom sink which I wish to goodness I could find right now with our Search function...

I hope I didn't come across too much as negating the macro photos. They are hot, there's certainly a place for them -- just as, for a totally random example, I would love to see Rocky Marciano take pictures with his camera-phone and show us his SotD's. There's plenty of room for that too!

Glenn, I've thought about taking "action" shots during or right after my shave, but I don't want my camera anywhere near the bathroom at that point and it already seems like I pour a ton of time into it. Already the length of my photo, shower, and shave routine is raising the ire of my wife.

I'm all for new ideas. Close cropping for example also solves another problem, lousy backgrounds. Our bathroom is pretty plain with no character and I don't have any other antique-y rooms in the house that would make for good backgrounds as it is very new.

Thanks for the feedback though, I'm not an expert photographer, I'm just a guy with a decent camera fooling around and learning as I go.
Richard
Top

By the way, Richard, we still want an explanation about the Trumper tube's cap.

By the way, Richard, we still want an explanation about the Trumper tube's cap.

I bought it that way from Sam (I think) who in turn bought it from msandoval858 (Mike). I'm actually surprised I can remember that. Maybe Mike switched the caps with something else. Comments Mike?
Richard
Top

first time i use a derby blade. i did not like it. it was a great shave nevertheless. and how can it be a bad shave when you have led zeppelin's 'tangerine' playing in the background?

lyrt, what brand is your razor stand? did you buy it in france? merci.

That is indeed a nice razor stand.

schaves wrote:lyrt, what brand is your razor stand? did you buy it in france? merci.

Expensive, but built like a tank. Made in Germany, bought from American CS. I didn't pay the French VAT and took advantage of exchange rates.
Top 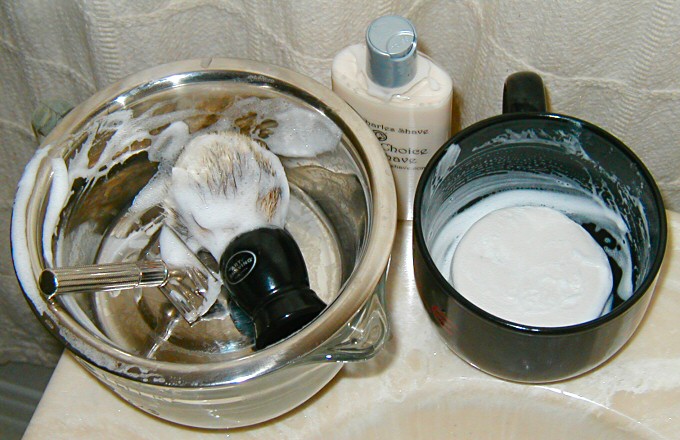 After I shaved, my wife gave me a quick smooch that turned into a big smooch so she could smell the Fairway soap and Tony's Choice ASB. Yum!! After which she held my face in her hands, giggled sweetly, and said, "Oooh! Just like a baby!" I informed her that BBS is, in fact, a technical term on the shave forum. I'm beginning to see why she doesn't think I'm romantic...

rustyblade wrote:...Already the length of my photo, shower, and shave routine is raising the ire of my wife.

Yes, when my wife catches me cropping and manipulating SotD photos I definitely get The Look.

As always, good discussion changes my initial opinions for the better. I usually cheese out on the background of my SotD photos. With a little creativity I could do better than showing everyone my shower curtain for the upteenth time.

I sense a trend here.