Top of the morning to ya! Post pics and descriptions of your daily shaving gear and accessories!
Post Reply
13 posts • Page 1 of 1

The Jones Shake Sharp is deceptive-looking. It looks like a 1912 Gem razor, but uses DE blades. When I first examined the blade exposure, I was prepared for an aggressive, technical shave. However, the shave was highly efficient and surprisingly smooth. The razor sang as it cut. When I checked after the first pass, my whiskers were mowed down to the DFS level. I could have quit at that point, but decided to go w/ an ATG for my second pass. The result was a two pass BBS w/ no irritation picked up by the alum block. This razor is going into the regular rotation along with the Cooper. Two consecutive days of an effortless BBS.

I am going to cheat a little now... this picture is not exactly from today but actually instead from a couple of days ago – I hope that you all can forgive me! 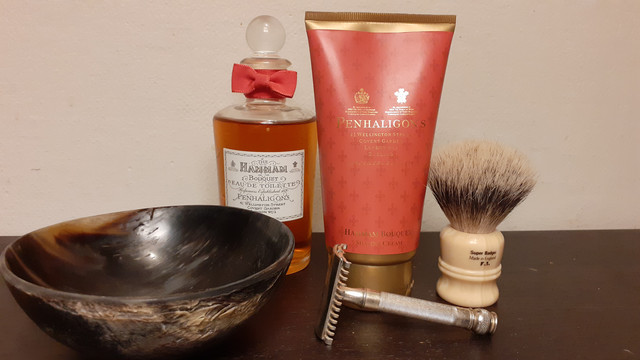 Sorry for the late posting, I’ve been running around getting ready for our flight to Las Vegas to celebrate Thanksgiving w/ my wife’s family. Great face and noggin shave today w/ a new razor I’ve been waiting for since August! The RazoRock DLC(Diamond-Like Carbon) Coated 316L Stainless Steel Lupo. Unfortunately, due to its popularity, and limited distribution, Joe at Italian Barber only releases this razor in small batches and they go like hot cakes. I won’t say anymore other than to recommend you see ‘Ruds Shave’s review’ on YouTube. There are two reviews - one of the aluminum version, and one of this razor, which he’s going to put up as artisan razor of the year. So make sure you watch the SS Lupo Review. I will attest that it’s one smooth-shaving highly efficient razor! Easy 3 pass BBS. I’m getting spoiled. The last three razors I’ve used have been top performers (Cooper Monobilt, Jones Shake Sharp, and this modern one, the Razorrock DLC SS Lupo).

Another great shave with this incredible razor on my first morning in Las Vegas. I really like these Suneko blades!

Quick face and noggin scrape this morning, but still a good DFS. I can always depend on my Vector, one of my favorite single edge razors! Brined the turkey overnight. Am off early with the bride to prepare Thanksgiving dinner. This is the first of two - her family today, and mine this Sunday.

I’m liking this razor more and more every time I shave with it. I do use some of my razors for just face shaves (i.e. Rex Ambassador), but my top criterion is versatility. If a razor has a sweet spot that delivers both head and face utility, that ticks all my boxes. Another great two pass BBS shave. I feel cool, clean and refreshed!

adhoc wrote: ↑
Mon Nov 25, 2019 8:29 pm
I am going to cheat a little now... this picture is not exactly from today but actually instead from a couple of days ago – I hope that you all can forgive me!

I'm feel somewhat extra generous today and I'll upload an additional picture of the yesterday or something shave.... this picture also a bottle of Trumper's Floreka and the bottle is made of actuall GLASS as they used to and should still be made that way today as well! If anyone couldn't care at all, I apologize in beforehand! 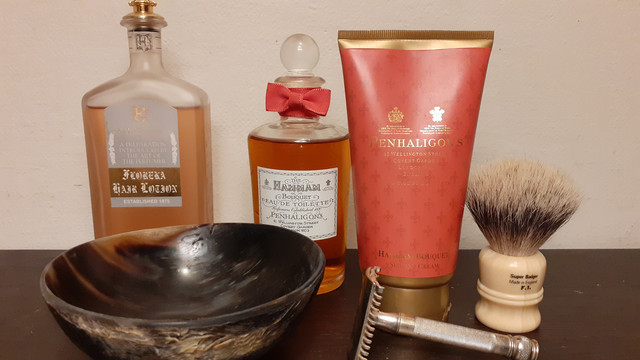 The attachment 94D34459-41B7-4460-9C60-2AB923E8EC7E.jpeg is no longer available
I’m kicking off decadent December w/ what’s turned out to be my favorite razor in my collection. My Jones Shake Sharp Model 1.0. Stacking the razor with two blades resulted in a smooth and effortless dome and face shave. Although the razor looks like a Gem style hoe design, it actually takes a DE blade. The razor was developed at the end of the carbon steel blade era and has a built-in hone which allowed the user to ‘shake sharpen’ his or her dulling carbon blade. In any case, this wonderful kickoff shave has left me smooth, clean and refreshed! Let’s hear it for decadent December!

In keeping with my pledge for Decadent December, this morning I broke out the Eclipse Red Ring, originally manufactured in Sheffield, England, which is a mid-aggressive shaver with a very narrow sweet spot. I was happy with the shave, but because of joint issues, needed to use my Jones Shake Sharp to finish the back of the dome. Nevertheless, a wholly enjoyable DFS. I feel smooth, clean and ready for the snow today!

Day three of Decadent December delivers my Ever Ready Streamline. My favorite Gem razor by far. BBS of both noggin and face. I really like the Gillette Pure Shaving Cream I used. It whipped up a nice thick, creamy, slick protective lather. Great shave that left me feeling cool(5 drops of M-Bomb and Cryogen AS), clean and refreshed. Shaving is my favorite part of the day!