Travelling with a Straight and Coping with Disparity

Travelling with a Straight and Coping with Disparity

I'm three years into my 'partial remission'/retirement, and spending as much time as I can exploiting my 1991 Miata that had only 32k KM on it in 2015. This has come to mean providing transport for The Boss, who continues to work and does so all over the place. She is a sub-specialist who basically can work wherever she chooses as she is a very rare bird. So there are the three nearest regional hospitals in this province, meetings in the city, yearly conferences for this province and for the collected maritime provinces, then monthly forays up to Cape Breton where her specialty is nearly unknown (there is an old hand there who deserves to retire, but he hasn't since he can't be replaced). Add to that the yearly conferences for this province, and then the maritimes as well. Probably just as well I don't have to drive her to the national or international meetings! But all that travel means a chance to examine shaving matters when travelling, and specifically for my interests, doing it with a straight razor and strop.

Sometimes I think to myself that it would be nice to own one straight razor. Just one. One that I could hone and use as best as I am able. Unfortunately for me, I have more than one, where 'more' is a very large multiplier. I have bought many razors in multiples, to make pairs for travel kits and seven day sets for - well, for what purpose, exactly? I likely felt I had reasons at the time, but I'm not sure I can recall them now.

Today's issue is about the fact that you can buy two razors exactly the same, perhaps to fit in a travel kit, and they don't hone up equally. Many razors have been sold in the last twenty years available with more than one kind of scale, often a black and white kind of thing. The first brand new straight razors I ever bought were a pair of Dovo faux Damascus stainless with Micarta scales in 'ivory' and 'ebony' (might I add a grimace for the scales and another one for the wretched blades? No? Never mind, then. Find out for yourself.) Since then I have black and blonde horned Dovo Bergischer Lowe razors, black and red scaled Dovo Bismarcks, and no end of other historical pairs, ending with Polish Wapienicas that would fit in an ancient travel case that required razors with very flat and thin scales.
But there is always a problem, and that is that when you hone two razors - even ones supposedly the same model bought at the same time from the same manufacturer - they don't hone equally well. Sometimes it's the fault of the manufacturer (handmade products are not going to be consistent) and sometimes it's the honer. But I'm going to suggest that we look at that issue the wrong way round, and the question you must ask yourself first is why you need two razors that are duplicates?

Obviously, the answer is that you don't, and if you are going to spend hard-earned money on two razors, you might enjoy two different ones more than a pair. Straight razor shavers tend to travel with a backup: we can't simply change a blade or cartridge as safety razors can. Should I drop my razor and nick the edge, how shall I proceed? That's why I need a backup razor, which I hope I won't need, and which I almost certainly won't the better and more confident I become in handling my primary straight razor. So, given that a backup is just that, why do I expect it to be exactly like my primary razor? It just has to fill the gap if there is a problem.

So these days, when I travel with a pair of straights, I tend to identify which one of the pair I'd like to shave with, and simply use that razor. The other one? - hopefully there isn't a reason to use it. Trying to make them both equally good would be a reflection of something inside my head, and not a necessity of the real-life world!

Here are some travelling pairs: 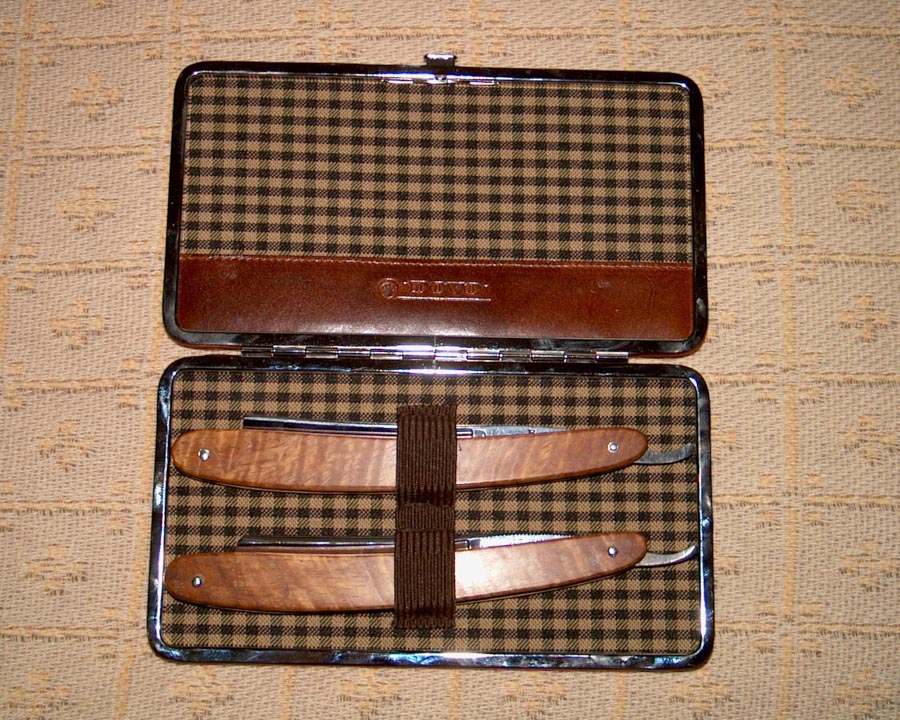 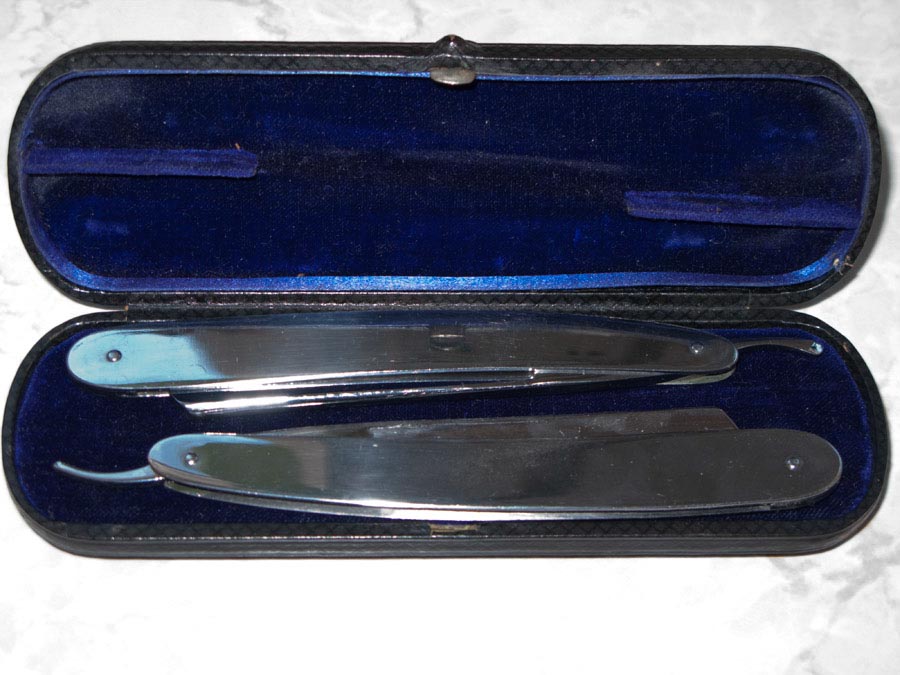 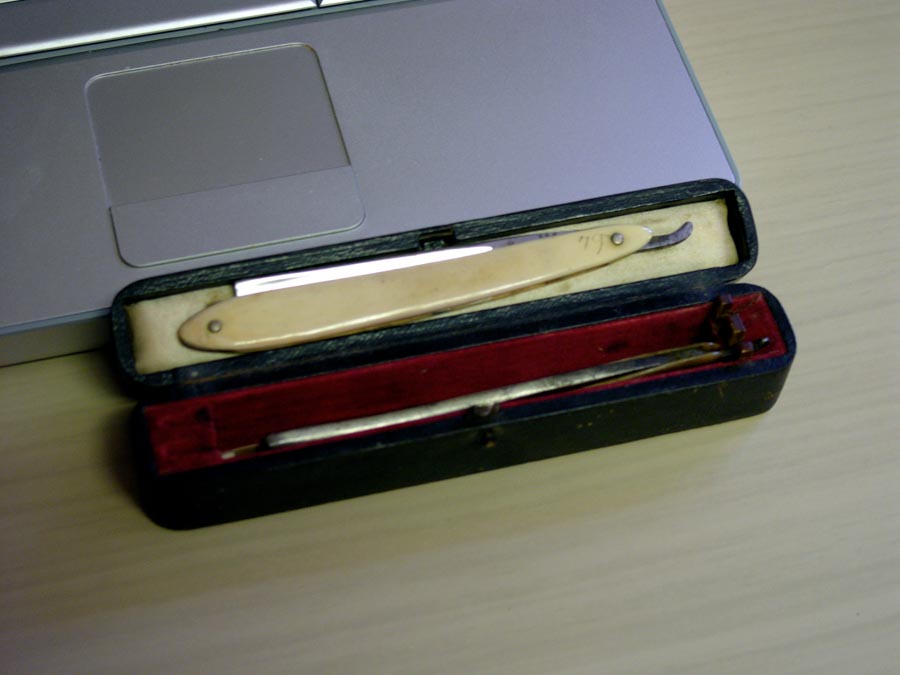 In each case (pun intended), it will be best to pick the sharpest razor and use it. Keep the other for backup as intended. Remember this and be happy.
"Je n'ai pas besoin de cette hypothèse."
Pierre-Simon de Laplace
Top

Re: Travelling with a Straight and Coping with Disparity

I started out straight shaving when I was 12 or 13. I used the same razor until my late twenties.

When we all started going to University I took that razor with me when I visited friends at their college etc. I never even considered a back up.

Fast forward to today and I have a small plethora of razors to choose from when I go traveling and you know what? I always take a back up and I never need it.

I attribute the none-need for a back up to hardened habits from the days when I didn't have one. It had to work as there was no alternative. I attribute the desire to always take one to marketing and the fear of having to need one and not having one.

Fortunately I don't travel much these days but if I should need to I'll only take one blade. That said I just bought a back up blade for my current favorite blade just in case I screw up my current one. Go figure.