Another wedge for you this week, but around 100 years older than the Spear Wedge. 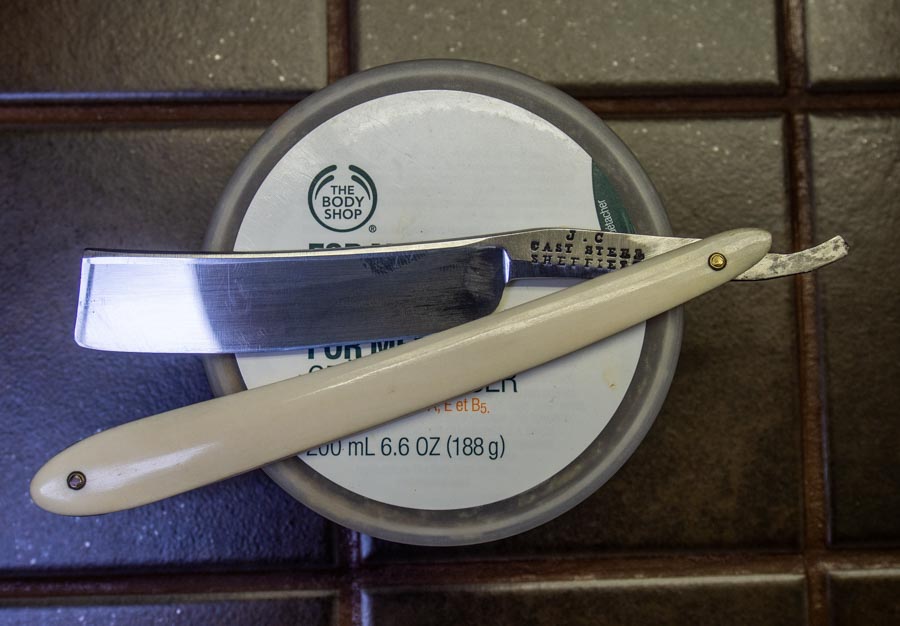 (there's quite a bit of oil on the blade, hence the marks)

This razor probably dates from 1820 - 1830. There are several clues, the first being the use of the term "Cast Steel". This was a way that crucible steel was marketed. Crucible steel is fascinating stuff, and harks back to the ancient wootz process of India. It was discovered in the West by Benjamin Huntsman, who was looking for harder steel to make better clocksprings, and transformed Sheffield from a minor site of conversion of Swedish wrought iron to steel, to the main supplier of steel in Europe. I'm not a metallurgist, as will be very obvious to some, but all metallic iron and all steel is an alloy of iron and carbon. Super high carbon content (2% - 6.67%) we know today as cast iron (pig iron once upon a time) which is brittle and hard with a coarse crystalline structure. Very low carbon content (<0.08%) and you have the extremely soft and malleable wrought iron. In between, but with carefully controlled carbon content is steel (ie 0.08% -2%). To get there we could decarburize cast iron, carburize wrought iron, or carefully mix the right proportions of cast iron and wrought iron. Huntsman cleverly took blister steel, made by carburizing wrought iron with charcoal in a cementation furnace, and heated it with a flux by using coke. Coke allowed higher temperatures to be achieved than could be done with coal or charcoal, and he could thus make a much more homogeneous product as it had all been properly melted, mixed and reacted. A controlled reduction in carbon content of the blister steel and a homogeneous product. Previous crucible methods were famous (and indeed, cherished) for their homogeneous output, which had some advantages in some applications - yes, that's Damascus steel. One massive disadvantage for industry was that any steel with a higher than desired carbon content, including the parts of a damascus-type wootz steel, had to be smithed over and over again to beat the slag out of it. Huntsman's steel came out without the need for that, and it could be poured straight into molds for the product to be made. Hence it was called 'cast steel'. As the process came to predominate in all steel production, the need to differentiate it by name was lessened, and you don't see cast steel used as a special descriptor after about 1830.
It would be much simpler if I knew who J.C. was, and the dates of the business's operation! For now I'll assume there's no celestial connection.
Other clues to age are the relatively straight scales, and the blade's pronounced tendency to get wider at the point with a smile leading back to the heel, which is a hangover from razors made before the 18th century. The shank of the razor has a curious bevel on each side, leading to the stabiliser being rather rudimentary. There are no jimps, as expected for a razor from this era, and the tang is thick with little curvature and a rather squared-off end. Highy curved tangs are more modern features, and tangs with a crudely-filed "machine head" are much older. The scales reveal another oddity. The scale on the reverse of the razor has typical bone-striations on it, and it considerably thicker than the scale on the face side, which has no striations. It looks like ivory, while the rear scale is bone. Whether the bone was a replacement or whether it came that way from the factory, I can't say, but I have never seen another razor sold with different scales. Pins and washers are brass or bronze. 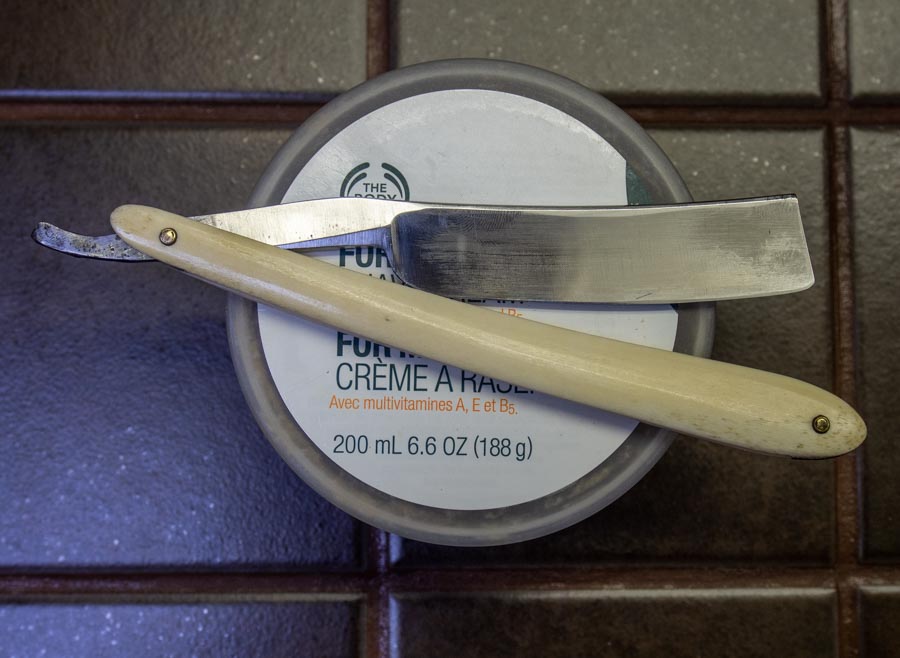 Note the difference in scale thickness by the hinge pin: 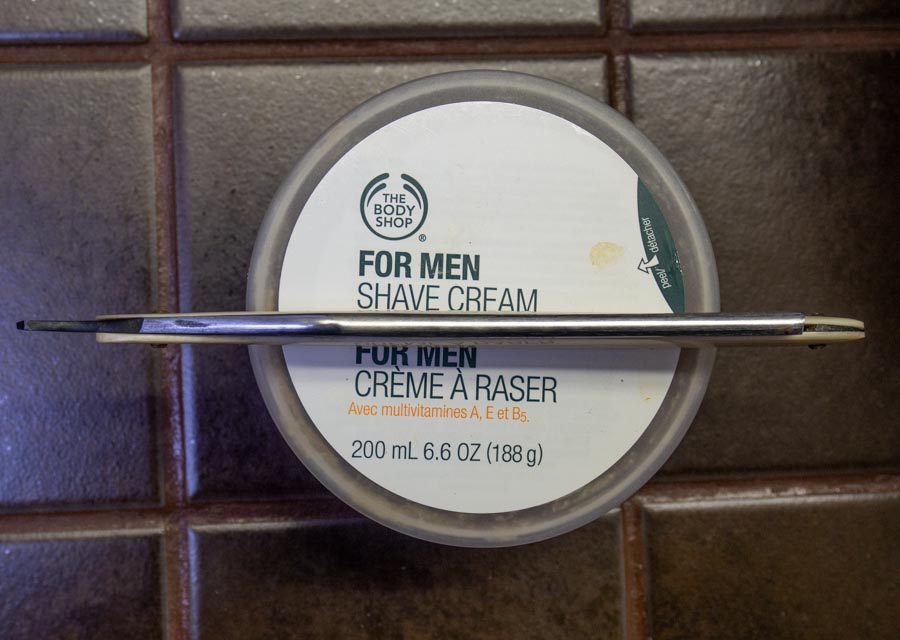 The point is square and the grind has the barest hint of a hollow - effectively it is a full wedge. 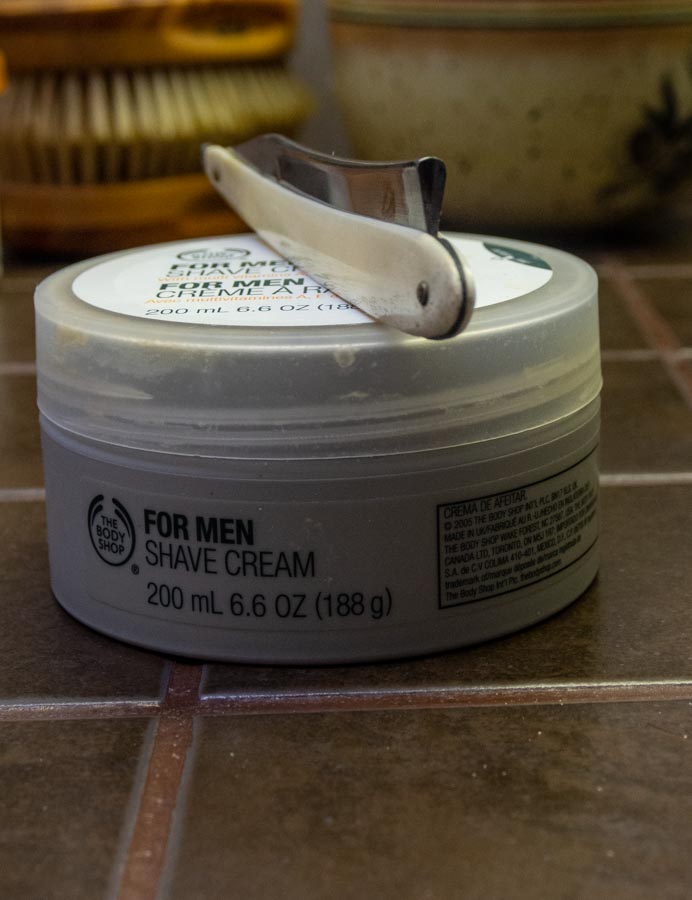 I think the steel isn't overly hard, given the amount that is left on the stone, but I'll note that Huntsman's steel was slow to be adopted in Sheffield as it was initially considered too hard to be easily worked. It does hone up easily, despite the smiling edge. Now I'm not particularly good with smiling blades, especially with my tiny Escher, so I used red, green and TI diamond paste. Nothing old-fashioned about the resulting shave, which was perfect. I do love a wedge shave! The previous owner, who sold it to me in 2004, had polished the blade with metal polish, but left the tang alone. If it weren't for the stains on the tang, and the obviously dated design features, this could pass for a brand new razor. Let's hope it lasts another 200 years!
"Je n'ai pas besoin de cette hypothèse."
Pierre-Simon de Laplace
Top

Thanks for sharing. The history behind this stuff makes it a lot more interesting to use these blades.
Top

Oh, doesn't it? Shaving with historical tools, consumables and techniques is so much richer an experience I can't begin to understand why anyone would prefer the inferior experience, and the inferior results, of the dreck that Gillette pumps out these days. Maybe they just went along, and never thought about it. I'm probably guilty of the same thing in some area of my life.
I'll go a step further, and say that I don't denigrate anything modern over the old, nor prefer the old just because of its age. What helps complete the experience for me is to understand the place of the tool (its design and how it evolved and why, material science, techniques of use, the sociology of the tool and it's usage - who shaved whom, and why one might shave oneself etc) in the march of history. So there's a fascination with shaving per se, the effects of being the scion of generations of engineers* who simply cannot help themselves when it comes to looking at tool design, use and suitability, and an added interest in history. I might just extrude one of these posts each week as long as I'm able. There's enough razors to do it!

*Engineers. A very conservative group who naturally prefer the known and the understood. Might be another reason for my preferences in all sorts of things, for which there is likely an explanation. I have nothing against new technology, yet I prefer muzzle loaders, steam locos, vinyl LPs, vacuum tubes and straight razors. There's something going on.
"Je n'ai pas besoin de cette hypothèse."
Pierre-Simon de Laplace
Top

Beautiful blade and fascinating story. Thanks for sharing this.

Much of what you say for why you love this stuff is true, I think, about a lot of us. I know, myself, I like things that work and last.