What is your opinion on fine shaving creams and hard soaps? Do you like Trumpers, Coates, Taylors, Truefitt & Hill? Post your reviews and opinions here!
Post Reply
12 posts • Page 1 of 1

I alluded to some soaps I had been sent a short while ago, and have permission to review them. I don't allow myself to review items I haven't paid for, but these were sent to me as a civilian, by someone who had no idea about the existence of SMF. My brother met a chemist in the course of his work, and she mentioned that her husband, also a chemist, made shaving soap. A conversation ensued and he ended up sending me some samples simply out of goodwill. They were until a few days ago being sold at adasoapshop.com, but today I find the domain parked. I have sent a mail to Patrick, the gentleman concerned, and will let you know what is going on when I find out.
Patrick's philosophy on soap matches mine - physically soft, with thick creamy lather. He is more concerned with scent than I am, and is a believer in natural essential oils. Personally, I have no objection to any scent as long as I like it - natural or artificial origin matters not to me, but I must like it. He also believes in superfatting his soaps after saponification. If all the alkali is consumed (as it should be if you have done your arithmetic right) then this approach means you can determine exactly which oil(s) constitute your superfat. My approach is to add a calculated excess of fats to the alkali. The advantage for me is that any extra alkali will be mopped up by the extra fat meaning the soap is ready for use without a month of aging and no risk of alkali burns. The disadvantage for me is that the superfat percentage might be slightly less if some goes to combining with extra alkali, and the superfat my soap contains will consist of the same fats in the same proportions as I threw into the pan at the start. For commercial reasons it is more attractive to be able to say your soap contains extra <exotic oil> than to say the extra is 30% lard, 30% stearic acid, etc etc.
So, on to the soaps. I have two shaving soaps, both in nice screw topped tins, very convenient for travel, but not so good at making lots of lather. If I had any room to spare on the bathroom counter, I would turn them out into bowls to allow proper promiscuous lathering. One is peppermint and the other lavender. The scent is strong, and, as mentioned, made with natural essential oils. They are made from a mixture of stearic acid (ie the same as tallow) and palm oil, and with a combination of both NaOH and KOH, to allow a compromise between softness and latherability. The basic ingredients are the same:
stearic acid, water, palm oil, KOH, Shea butter, Castor oil, NaOH, cannabis sativa oil, sunflower oil, argan oil (that's the superfat), witch hazel, glycerin, kaolin, and then the scenting oil, be it peppermint or lavender. Allowing for the fact I am lathering on top of a tin in the palm of my hand, they produce a decent lather, and I'm hopeful that in a bowl it could be thickened into the kind of thing I really go for. My big bowl of original rose Klar Kabinett will soon be done, and when it is I'll devote the bowl to one of these. Shaves go very nicely, despite my ignorance of qualities like 'cushion' and 'glide' and the lather smells glorious. Really worth a try, and miles better than most kitchen-artisan-soapmaker nonsense which seems to have flooded our little world.
Patrick also included a couple of hand soaps, lip balms and a bay rum and rosemary spray (which is less like a leg of lamb than it sounds). The products: 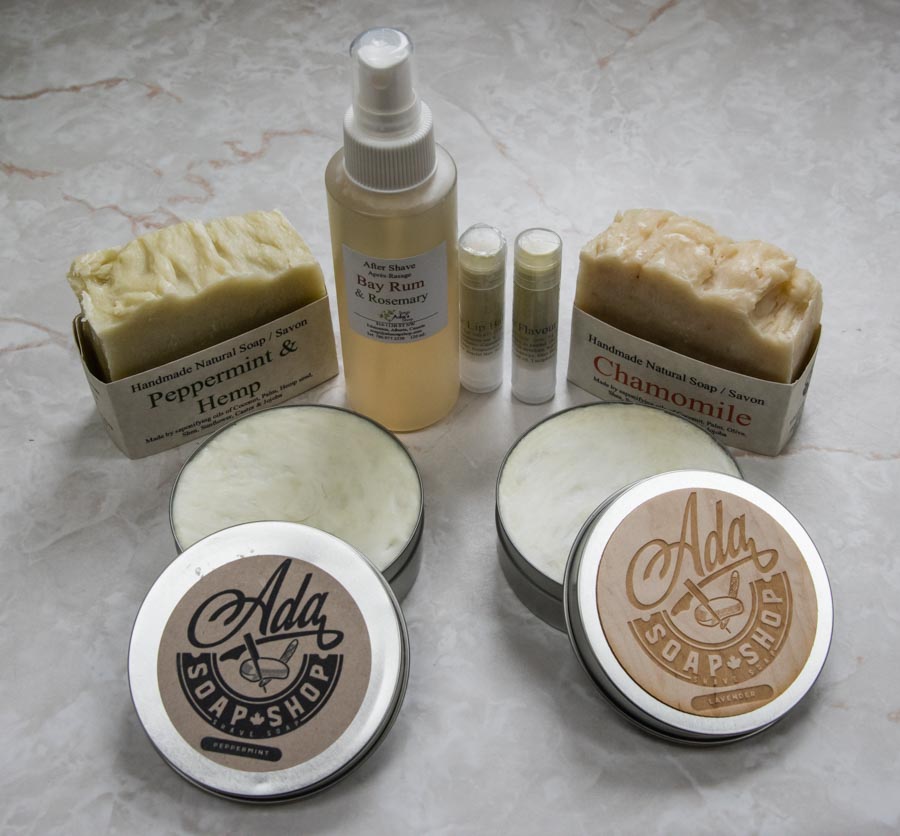 As I say, I'll let you know when his website is back up and what the address is - you won't be wasting your time in trying these out.

Their last post on their Facebook page is about cooking soap, dates back to January 12th this year. Located in Edmonton Alberta Canada.

Lets hope things will be sorted out promptly, a new source of quality soaps is always welcome and with less than 30 cakes of soap, I'm starting to "run out".

I had a reply from Patrick, and he tells me he is abandoning his own website, finding his volume of sales low enough that he couldn't get a shipping discount from Canada Post. He can still be contacted via Facebook (@adasoapshop) and in about one month his soaps will be available at Canadian Blade Co. That site charges a flat rate of $10CAN to ship to the USA, and $7.50CAN within Canada ($5 in AB, and free home delivery in Lethbridge, AB!)

Thank you for the update Dr. Moss.

I'll keep working on my stash of old stuff, and when it's available again, I may just have to try out a cake or two.

If we are both curious and lucky, maybe someone will make themselves a note to follow up to see if these intriguing soaps become available in a month or so, and then remember to return here to post the news.
Gary

I have a mega-hoard of soap already, so I probably won't actually be in need of any more during my lifetime, but a soap of good quality and performance scented with EO is always tempting. Upon this recommendation I will certainly keep Ada soap in mind. Thanks, Chris.

Thanks...i'd like to try some of the hand soaps

LIke Murray, I have quite a stock pile of creams and soaps... but I've never let that stop me from trying a new one!

I will be waiting until they are available from the Canadian Blade Co. (a new shop to me), and if any of the scents tickle my fancy, I'll likely be a goner. I'm still lamenting the loss of the original QED soaps.... They were perhaps not the best shave soaps.... OK, they really were not the *best*, but they had some really nice scents that I have not found anywhere else. Subtle is NOT a word used in the same sentence as QED soap scents.

I see they are available as promised:

I have a couple more of these soaps to try out, rose and sandalwood. The sandalwood is very lightly scented, but it is authentic pure sandalwood, and only distantly resembles the sandalwoods made by Trumpers, C&E and so on. Patrick tells me he has tweaked his recipe, but the ingredients look the same as the older soaps, so it might be in the method that he has made some changes.
I used the sandalwood today, and it is very quick to lather and makes a very thick and creamy lather. Excellent smooth shave - this guy knows what he is about!
There were some other items in his package - a rose aftershave balm which is quite thick and waxy, so it only needs a little bit. It will take a few days of use before I can pronounce on its effects, but it certainly makes my hands as soft as the proverbial baby's bum! If he makes this in the sandalwood it will be superb. The other two items are shaving oils, which are products I have been philosophically opposed to using. I may just have to try them out for your sakes, but I still have the feeling that using an oil is just something that makes up for inadequate beard prep. We'll see.

Thanks. I just bought a tub of rose. Looking forward to trying it.

Sort of off topic and probably just me and my luck....the rose tin with a crowned skull is NOT my cup of tea....maybe if i was a hells angel or something it would work