A Blast From The Past

What is your opinion on fine shaving creams and hard soaps? Do you like Trumpers, Coates, Taylors, Truefitt & Hill? Post your reviews and opinions here!
Post Reply
6 posts • Page 1 of 1

A Blast From The Past

Here's a laugh for you - I have so many pots of cream stashed away I don't even remember that some of them existed. Like Little Jack Horner I went into the corner where the Drawers of Shame live and stuck in my thumb (along with some fingers), and pulled out a dark blue pot that said Charles Tyrwhitt, Lemon and Cedar Shaving Cream. I remember the Irish adventurer who decided to sell some shirts on Jermyn Street - I bought several, along with some boots and covert coats. I believe he even sends me a catalogue twice a year which goes straight into the bin. However, I don't remember this cream, buying it, or what it might smell like. How exciting!
It took the pair of us, some silicone pot handlers and a ratcheting lid opener to get the top off, and when we did, the remnants were a bit less well preserved than Mr DiCaprio in The Revenant. Hard, golden brown, with white spots. Rather like boiling cinder toffee before it is poured into the mold to make a Crunchie bar. 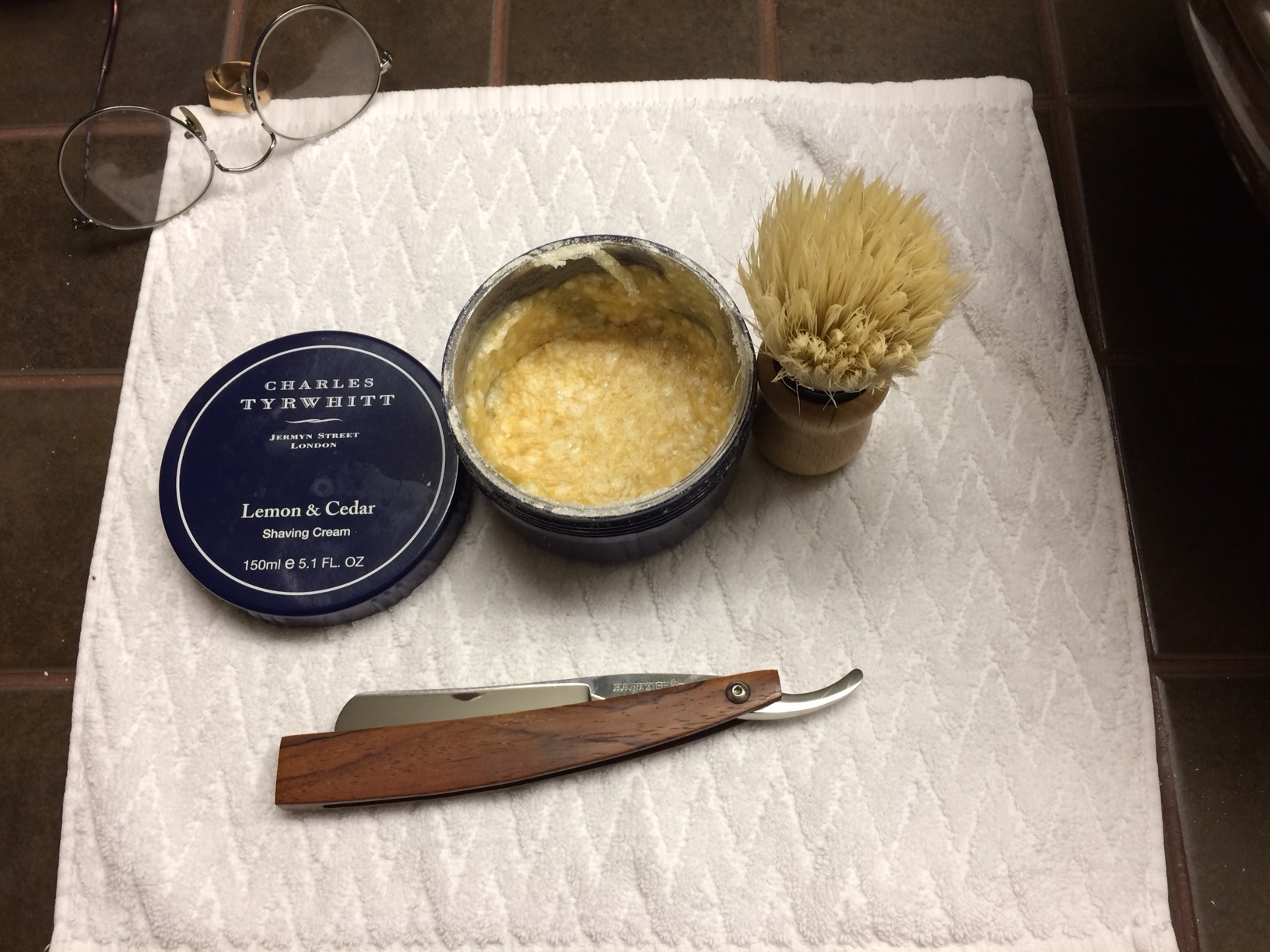 And the smell? Some of you may have been scarred for life by hard and shiny toilet paper made, nay, engineered and constructed for the sons of empire under the trade name of Izal. Perhaps we ought not to mention where you bear those scars, but let me say that I feel your pain. The same stuff that The Beatles refused to use at Abbey Road studios. Much as I hate to trigger you, that was the smell. Fake pine disinfectant.

Having a good deal of self-respect (yet, perhaps, in retrospect, not quite enough), I did the natural thing and pounced upon it with a shaving brush, making a tolerable lather as if it were meant all along to be a hard soap. Like anyone else who has survived at SMF, I can get a perfectly good shave with something as thin as, say, Himmler's tears, and this shave was perfectly good. I did have to do my best to ignore the Zalpine odours though, which seemed to belong a few feet to the left in my particular bathroom, where they usually do an admirable job at removing those stains. I shall now throw it out, unless there is an unusually inquisitive shaving archeologist out there who wants to study the remains.

Should I survive, I may dig deeper into those drawers.

I remember buying some pots way back as well. I loved this cream very much but hung on to some for way too long.
I had to chuck them out as they were harder than granite.

Hi Chris, a really entertaining post and quite timely as for some reason I was thinking about this very cream only the other day.

I never tried it actually, and I think CT stopped selling it around the time I started shaving with a brush. Was it available in the UK because I used to buy their shirts in the mid-2000s and never remember seeing it?

What else have you got there in the Drawers of Shame, Chris?

At one time I prided myself on owning at least one tub or one puck of every shaving cream or soap from the official (non-artisanal/homemade) market. I've given away a lot, but still have most of it. Including the entire remaining world supply of Vinolia, original Woods of Windsor soap and the glorious Sabon Gal. All the Italian soft soaps (including P.160 tipo morbido or tipo duro in kg blocks), all the Trumper, Harris, Taylor, T&H, Salter and AOS creams and soaps in tallowy glory. Some oakmoss-filled Eucris (will it return after Brexit?). C&E, Castle Forbes and some French rubbish (I never met a French soap I liked save for the Joris, which is actually made in England). I still have 100 soaps in wooden bowls on the Shelves of Shame. The cause for all this neglect was my homemade soap, which has been used nearly exclusively since I made it as I know of no other lather quite like it. If only I were clever enough to be able to scent it properly! There are back up bottles of my favorite scents, though I did give away one of my old unopened Floris 89 bottles this Christmas, and in return was given a Cacharel Pour L'Homme from 1980. Then there are the strops, the razors—I could go on, and on, and on....sic transit gloria mundi.

My plan is to run out of all existing soaps and creams on hand, including my own homemade, on or before my 80th birthday, which I shall celebrate by getting a new electric razor as a gift and using it exclusively every day from then on. There's no more soap or cream to be added to my humble hoard, while all of them are fair game to be either used up, sold, thrown away or given away on schedule. Maybe because of OCD or just a military habit of having what I need to succeed, I've made sure to lay in adequate supplies of Superior 70, Feather Pro blades, razor and brush to match up with the expiration of the finite quantity of soap and cream. In other words, it'll be such a waste if I should shuffle off this mortal coil before the deadline. Wow, I didn't intend that pun, but I like it anyway! All that will be left, according to schedule, will be one razor and one brush to go to the survivors.
Gary