Let's talk about single and double edged razors and the blades that they use.
Post Reply
17 posts • Page 1 of 1

Remember how the AC Cobra was transformd by Shelby putting in a V8? I can't promise the same with this, but it's a simple fix for a problem. I happen to have a large stock of Feather AC blades, around 2/3 of them are the Professional Super blades which are ~0.06mm thicker and ~0.85mm wider. I preferred them in The Feather AC razor as they were more comfortable and less prone to cutting divots. I haven't used the Feather AC in a long time, and I did think to buy a Cobra to use up the blades. Periodically I use it for a few weeks and then go back to my straights. But Professional blade supplies are dwindling at home, so I thought I'd better see if I can use the Professional Super blades. NB. by mistake I did once jam one in and of course the edge of the blade sat up on top of the blade retaining bumps at one side (though not at the other, maybe a difference caused by uneven plating, or by play in the hinges of the blade support plate). Naturally it instantly gouged me. The razor needs a tiny modification to take one of these blades, and that is to carefully file away just a little of the blade retaining bumps. I have two Cobras, so I can alter one for the Pro Super blades and keep the other for the Pro blades. I used a square section rat tail file, and it took less than two minutes per side. Once you have filed through the chrome plate it seems to be brass inside as it files away quickly. Don't overdo it, as there isn't much metal in these little bumps that sit in front of the corners of the blade, and if you take it right off you will be relying on the projections on the blade support plate that sit in the elliptical holes in the blade to hold it in, and what's worse, hold it still relative to the razor as you shave. I don't think this will work at all.
Doing this alters the geometry of the razor in an important way: the blade edge is now closer to the lip of the blade guard and I would expect it to be more aggressive as a result. I expect some care and attention to angle will allow me to cope with that, but tomorrow I will find out. 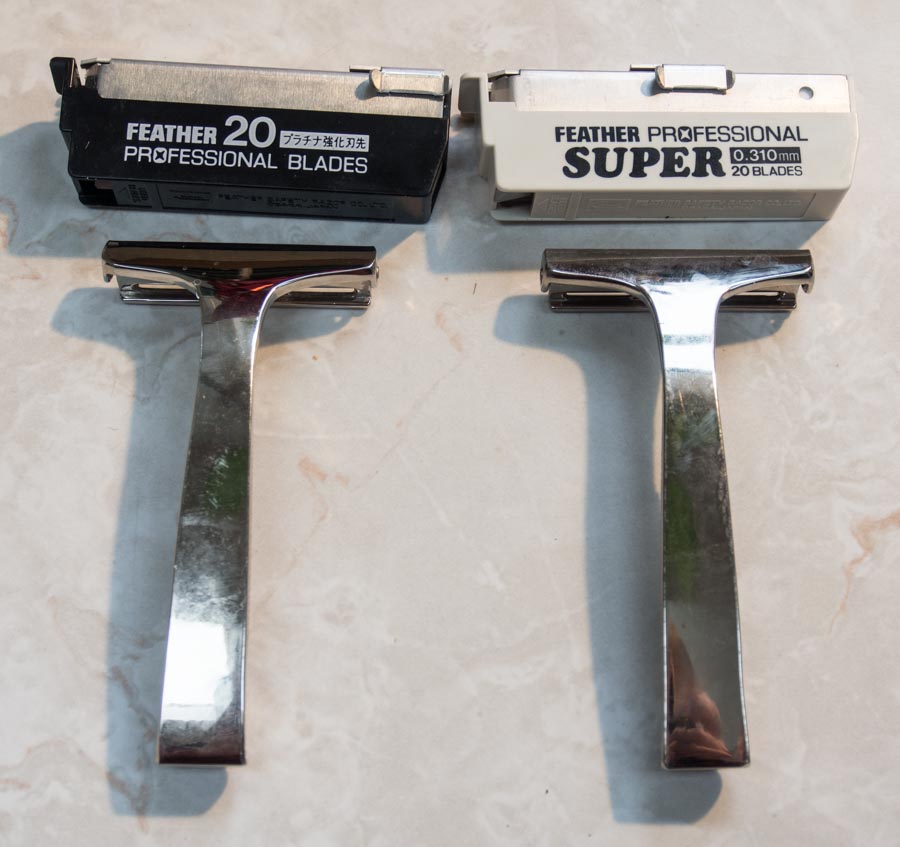 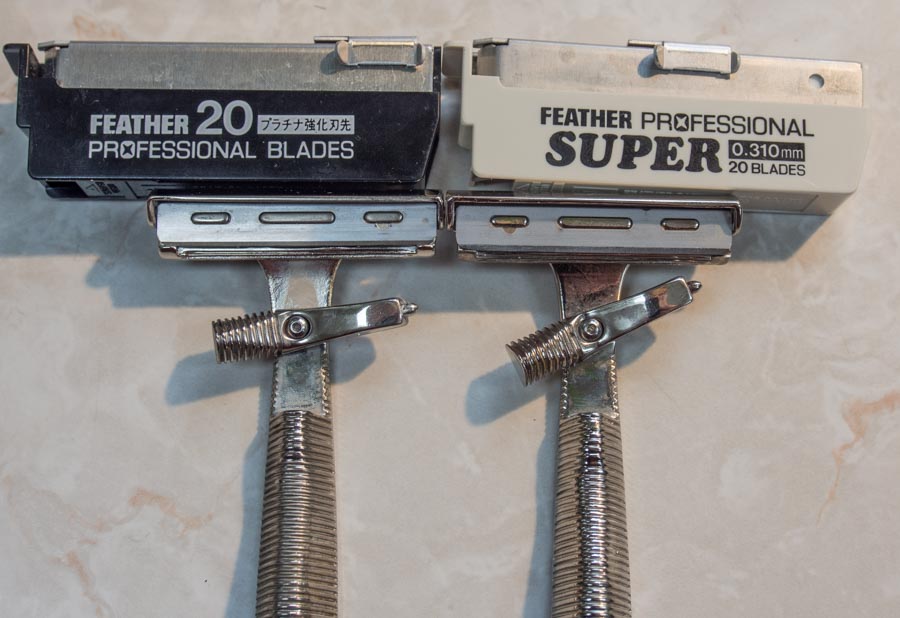 and a 100% crop to show the different blade widths, the positions of the edges relative to the guard, and the filed retaining bump: 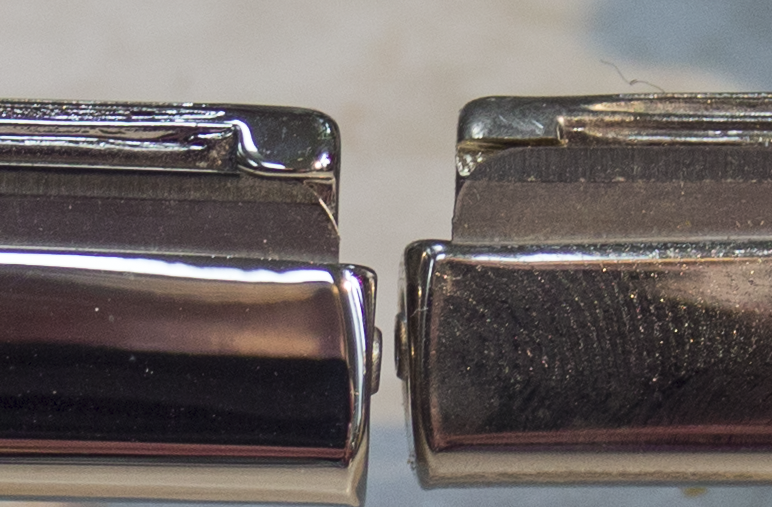 Let us hope tomorrow will not resemble a re-make of 'There Will Be Blood'!

Nice -- looking forward to hearing of your non-blood results.
Wendell

It appears to be a substantial modification. Looking forward with much interest to learn how it works out for you.
Gary

Well that was remarkable. It simulates the peculiar feel of a shave with a Feather AC quite well (little feedback but a clean sweep) without having to take the kind of care the AC demands. It doesn't seem to bite even when using extreme angles - no nicks at all, but then I am being careful to exert very little pressure on the razor's head. A single pass downwards gave very respectable results, and a sideways touch up on the cheeks alone has me quite happy. No, not as satisfying as a straight shave, but quicker and if it means the Professional Super blades won't go to waste I'm happy.
I can't see there being many who would try this. If you have a Cobra you can buy just the blades you need and that's that. Only those who have a stock of Professional Super blades left over from the heyday of the AC (what—ten years ago?) will have an interest in this. It isn't the same razor at all with this blade and this geometry. It really is a 'Shelby Cobra'!

Two weeks with the Professional Super blade and I'm enjoying it enormously. When the blade was new there was practically no feedback—swipe the razor down and it felt like it had no blade in, but the hair was all gone. Now the blade has been used for two weeks and it ought to be changed, but could go another day or two. It tugs just a little. Still giving superb results with no nicks or the ingrowing hairs I always get if I try for a very close shave with a DE blade. All in all it's a dramatically better razor with a Pro Super blade than with the Pro blade. When a safety razor can keep me away from my straights for two weeks it must have something going for it!

I'm down to my last pack of 20 Professional Super blades, and I think I'll swap the modified Cobra into my travel kit. It might take a long time to use them, as I don't travel much anymore, and there will be a period of no sharp shaving implements coming up before long (low platelets). At that point I think the best thing to do would be to send the razor on to someone who likes to experiment with Feather AC blades. Would it interest you, Gary? You would have to have Professional Super blades for it as the ordinary Professionals would rattle around loose in it.

Chris, I would be proud to accept it from you, considering the history and the amount of planning and work you have invested in this unique treasure of a razor.
Gary

PM me with your address, then.

Chris, have you ever tried the Schick Proline blades?
Top

No, but then I have a large stash of Feather Professionals left over from the days of the Artists Club. These I can use in an unmodified Cobra and the General.
"Je n'ai pas besoin de cette hypothèse."
Pierre-Simon de Laplace
Top

I think the longer of the two Proline blades will fit the unmodified General or Cobra. I only have the shorter Schick injector size, but Gary might be glad to send you some longer ones. You might find it nicer than the Feather. Shaves very close, but easier on the skin.
Top

I must confess almost complete ignorance when it comes to these types of razors. What are the main differences and benefits over using a DE (aside from the single blade edge, of course).

It's the blades - Feather blades are sharper than those from other manufacturers, both in the case of DE blades and shaper blades. Many people say they are too sharp, but if tamed with the right geometry razor, or a very careful hand if the shaper blades are used in the Artists' Club, they provide very nice shaves. Even then, some people will find they can't use them all the time as their skin will get sore. Remember years ago when the AC blades were being snapped so as to fit into a Schick Injector? People went that far for the chance of using them. In recent years, there have been several attempts to make a safety razor that would not need the blade to be snapped. The Cobra from Classic Shaving was the first, I believe, and was a little harsh. Others followed, of which I only have tried the General, which is a relatively mild razor with good results.

In the AC, I had preferred the wider, thicker, stiffer Professional Super blades to the thinner, narrower and sharper Professional blades. There was less tendency to get a nick from the edge of the blade deforming and fewer ingrown hairs. The edge lasted longer too. I had some packets of the former to use up, so I modified a Cobra to take them. Use them up it did, but the razor has an aggressive amount of blade exposure and must be used carefully. With a new blade and a light touch, you can get a single pass shave pretty darn close to any multiple pass shave,

I would still think it worthwhile for one of the manufacturers of these shaper blade SE razors to make one for the Professional Super blades - one unlike mine that would maintain proper edge to safety bar gap.
"Je n'ai pas besoin de cette hypothèse."
Pierre-Simon de Laplace
Top

I’m intrigued. Several years ago I stopped using a DE and a Schick injector SE because I wasn’t getting a satisfying shave with either: I couldn’t get a close shave without significant irritation and in some areas I couldn’t remove much stubble and had to clean up with a cartridge. As a result I reverted to using Mach3 and Sensor razors and achieved excellent results. After reading this thread I am wondering if it might be worthwhile for me to try a Cobra SE of some kind. Any guidance would be helpful.
Bryan
Top

I'd go for the General rather than the Cobra if I had to have just one.

Yes, the General is a great shaver.

They have been discussed here before - I have the black aluminum version - and I love it.
Gene

Gene, another option is to experiment with various combinations of Schick injector razors and blades. Different models have different amounts of blade exposure. The adjustable model is not hard to find for a moderate price. The less common blade that might give you the closest shave would be the shorter Schick Proline blade (B-20), though you'd have to transplant the blades to a regular dispenser to install it.

If you get a General or Cobra, the Proline blade that fits is the P-30. (The letter is what makes a difference; the number is just the number of blades in the pack.)
Top
Post Reply
17 posts • Page 1 of 1