What kind of fragrances do you prefer?
Post Reply
10 posts • Page 1 of 1

Found this by chance on the Internet about Atkinsons, a lavender perfumer:

"In 1799, the young James Atkinsons set out from Cumberland, the region of his birth, to seek his fortune in London. In no time at all, James had become famous for the jars of rose-perfumed bear grease which he sold to gentlemen customers as an ointment for the hair, beard and whiskers.

A few years later, his brother Edward came to join him and together they embarked on a great adventure which went far beyond the bounds of England. Their adventure has covered two centuries and five continents, their experience based on a search for the ingredients, rituals and wisdom of far-off lands and cultures which mirror the oft-forgotten needs of their modern-day patrons.

The success of J.&.E. Atkinsons, one of the oldest perfumers in the world, lies in its rich heritage, one which few other perfumers can match, and its unstinting ability to adapt true, lasting values to the modern world."

Richard, Really! I've studiously avoided going into the early history of Atkinsons. I did not think that many members were really....well...ready for the bear grease story. This is one of those historical tidbits that are for the serious aficionados. Sigh, yes rose scented bear grease, just the thing to keep those wayward locks in place. I've seen pictures of fine ceramic 'Atkinson Bears' from the 19th c. that were sometimes in barber shops or apothacarys. On some of their modern cologne labels you'll see a small bear emblem down near the bottom. That's why. Atkinsons went on to become one of the Royal perfumers, along with Gossnell and Floris, during Victoria's reign. Regards, Gordon
Top

Fascinating information. Atkinsons is still a brand, owned by a European firm. I Coloniali is an Atkinsons product, at least I think so. Does anybody have a tube of Atkinsons Lavender shaving cream? Just curious, and found this story about rose-scened bear grease.
Gary

Gary, For generations Atkinsons was one of the upper crust gentlemen's perfumers and soap makers with a shop in Mayfair, London. I've been told that there still is a plaque on the building or sidewalk to that effect. At some point, perhaps in the '60s or '70s, the firm and name was bought by one of the major cosmetics companies...I don't know the details or exactly when. I think the name is currently owned, ultimately, by Lever of Italy. But for many years, and perhaps even still, there were Atkinson colognes being bottled in the US that were a little different from the Italian versions. I was never able to learn anything of substance about who this firm was, or even where, let alone what their actual status was vis a vis the original London Atkinsons. There are a few gents on SMF who have tried, and reported on, the current Atkinson's Lavender shave cream and you should be able to dig those posts out of our archives.
Regards,
Gordon
Top

I walk past the old Atkinsons building at 24 Old Bond Street often enough. It's one of those buildings in London where it pays to look above the ground floor. It's like a cross between a cathedral and a chateau with a tower rising above the roof and a 23 bell carillon in the tower that rings out on special occasions. Perhaps it will play to celebrate the Royal Wedding. I was walking home from work one evening when I first heard it to stunning effect, it made the night seem magic. Worth a look by anyone doing the Jermyn Street, St James shaving shop tour, just cross Piccadilly and walk up Bond Street. It's a little way up on the right.

Reminds me of an episode of the Simpsons:

Jack, Thanks for the on-the-spot description and exact location. I would certainly stop by that address if ever I get over there. Such a shame that they were not able to remain in business as the original firm. I would love to have walked in there in 1910 or 1920. I do know that along with Floris, they supplied Churchill with toilet soaps for years.
Regards,
Gordon
Top

Gordon, for me its always been the independent shops and businesses that make London such a great place and it's sad when they go; but great when you find something new.

Here's a picture of one of those Atkinsons Bear Grease ceramic pots: 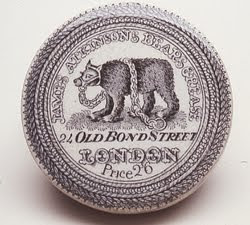 The image came from here:

Other than the cool label it's list of uses are surprising modern.
Regards,
Squire
Top
Post Reply
10 posts • Page 1 of 1