Busy so far today in the kitchen: starting at 5am I made a couple of baguettes, followed by a batch of mince pies, and then some three cheese and spinach stuffed manicotti. Christmas Eve supper is to be the manicottis with salad and the baguettes transformed into garlic bread, whilst the mince pies will join the scones I made yesterday for Christmas tea.

Here are the mince pies: 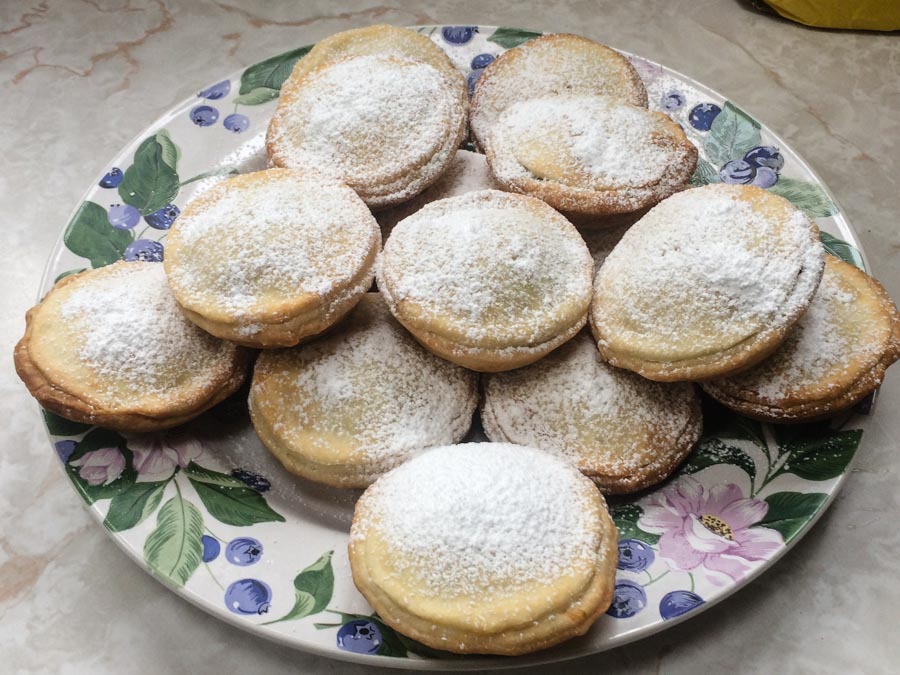 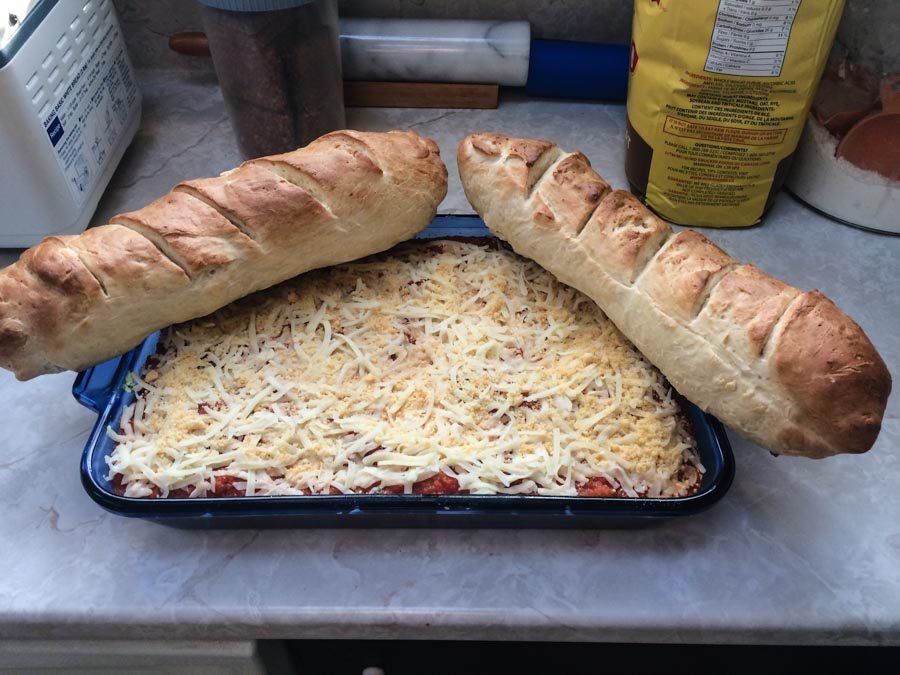 Yes, the stuffed manicotti with homemade tomato sauce haven't been in the oven yet. I didn't photograph the scones, and they are in the freezer. When they come out, there will be butter, whipped cream and pear jam on them. Given I have a vegetarian wife, our Christmas dinner will be grilled salmon with hollandaise sauce, roast potatoes, brussels sprouts with homemade cranberry sauce, and creamed parsnips. I didn't make a traditional Christmas pudding, but I do have some sticky toffee pudding and custard in the works.

That all looks awfully good, Chris!

Can you fedex leftovers???

One thing about america that i really dont like: no mince pies at the local bakeries

Yet, strangely, hot cross buns are available all year and not just for Easter.

Gosh, that all looks delicious. There's nothing like homemade bread and an Italian meal, so wonderful.

Can't say I've ever had mince pie but I have had a hankering to try Christmas pudding, which I've also never had until yesterday. Bought a small tub of it at the local Wegman's and gave it a go. It reminded me of the fruit filling in a Fig Newton bar but with more currant flavor. I didn't care for it much. Is the filling in mince pies similar?

Christmas Eve was a prime rib roast a la Gordon Ramsay. I served mashed potatoes and steamed broccoli. Turned out pretty good. Christmas day was spiral sliced ham, homemade mac and cheese, and asparagus (prepared two was, some was blanched and some was roasted). Also very nice.

Christmas was very merry with the kids turning the house into to toyland.

Hope you all had a wonderful Holiday as well.

Mince pies contain mincemeat, which was at one time minced meat, but these days it's usually five or six kinds of fruit chopped small and sitting in a thick, sweet sauce.

A real Christmas pudding is something you probably can't buy anywhere. It's a steamed pudding, made in a pudding cloth (hence "cloutie puddin'" in the north of the UK), which a mix of flour, suet, sugar, dried fruits - glacé cherries, sultanas, raisins, candied peel - and baking powder, eggs, milk and either stout or brandy. This mixed, wrapped and steamed for two hours. At this point it will keep for years, and was often made a year in advance and hung from the kitchen or larder ceiling. When ready to eat it, you steamed it again, and served with brandy butter or a sweet white sauce. Might be served flambé. Traditionally a small coin, best of all a 'threepenny dodger' (a long out of circulation silver 3d) or an old silver sixpence, would be in each pudding to bring luck to the finder. Ultimately it's a richer and more decadent version of the line of steamed fruit puddings like 'plum' pudding, 'figgy' duff, spotted dick and dead baby.
"Je n'ai pas besoin de cette hypothèse."
Pierre-Simon de Laplace
Top

We have a friend from Newfoundland who makes a traditional Christmas pudding for us every year; it’s absolutely delicious. She also makes figgy duff, plum pudding, spotted dick and peas pudding from time-to-time; I love them all along with boiled salt meat and cabbage.
Bryan
Top

I already found out about Spotted Dick years ago, but Dead Baby? What else is there that I don't know about?
Top

I’ve always thought Dead Baby pudding to be a basic Christmas Plum pudding. Have you heard of Dead Man’s Arm pudding or Dead Man’s Leg pudding? These are other names for Jam Roly-Poly pudding.
Bryan
Top

OK, I'm going to retaliate with foods in Yiddish. Have you ever had kreplach? Knishes are more likely, I suppose.
Top

Pauldog wrote: ↑Tue Jan 08, 2019 1:10 am OK, I'm going to retaliate with foods in Yiddish. Have you ever had kreplach? Knishes are more likely, I suppose.

I’ve had both, but I didn’t know I was eating a kreplach in the first instance. Many, many years ago I spent 2 months in the Montreal Jewish General Hospital where I got a good introduction to Jewish cuisine; actually, my roommate suggested I order from the kosher menu if I wanted decent food. I remember enjoying all of it and it was far superior to the slop offered up by the usual general hospital
Bryan
Top

Given that one is supposed to start a new year with a positive outlook I think it might be too early to talk about hospital food!


That's supposed to work on airplanes, too.
Top


That's supposed to work on airplanes, too.

I'll try to keep that in mind next time I fly.
Gary

Gary - that used to be something you could do. If you still can that would, indeed, be best.

Many years ago, when I first started flying as part of my work - when you registered for the frequent flyer programs for the various airlines there was a box for meal choice. Kosher was one of the choices.

Today - under the current "hub" system it seems like most of the flights are not long enough for the airline to serve a meal - except in first class. Everybody else buys fro a limited menu.
Gene

Ah, well, obviously it's been a long time since I flew anywhere.