I have mixed feelings about showing you this razor. The C-MON brand has an excellent reputation, and are very pretty. But this razor desperately needs a full restoration. The front of the blade is pitted whilst the back is clean. The gold wash on the shank is nearly gone from the front, but perfect on the reverse and on the tang. A few days later, and a new Dremel as my old one broke, I worked on the blade and got so far: 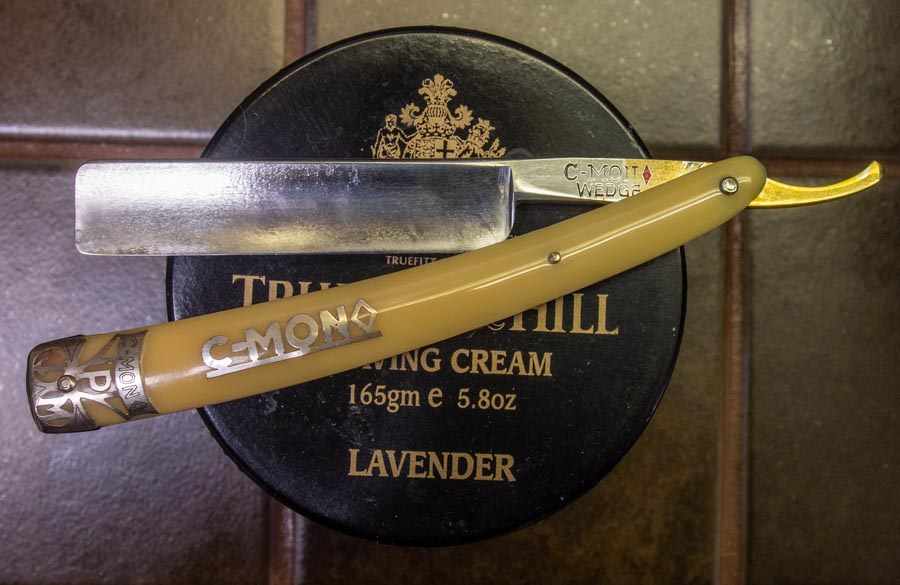 And now I realise I hadn't photographed the blade with all the rust spots on the front side (the reverse is pristine): 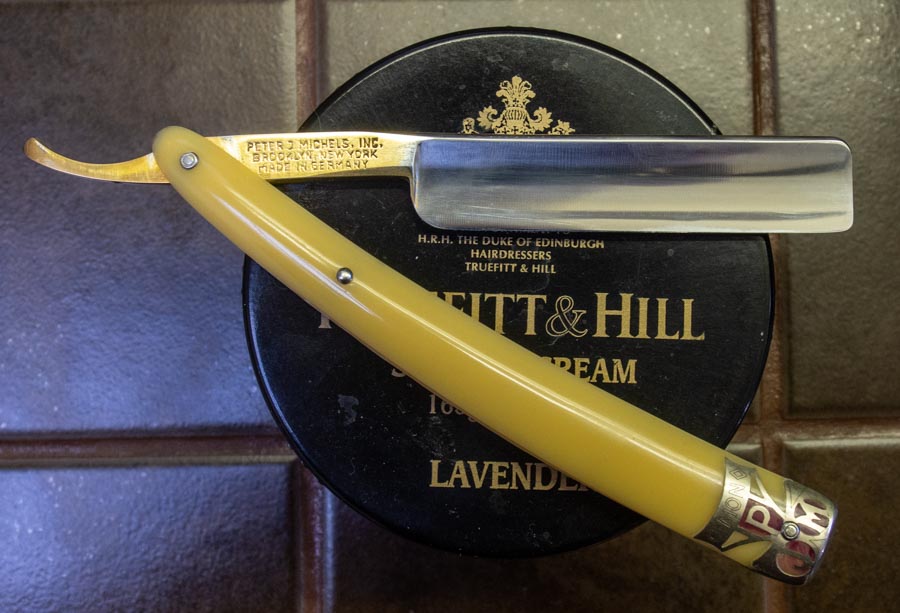 Thus far it is polished out with sandpaper, a steel wire wheel, a brass wire wheel, red paste and green paste. I need to buy some more felt pads to use some diamond paste on it. While I wait for them to come I resharpened it and decided to go ahead and have a test shave. I do wish I had photographed it before I started on grinding and polishing out the rust spots, but sans time machine there we are. There used to be a surface red colouration between the nickel steel framework at the base of the scales. It is nearly gone on the front, but more evident on the back: 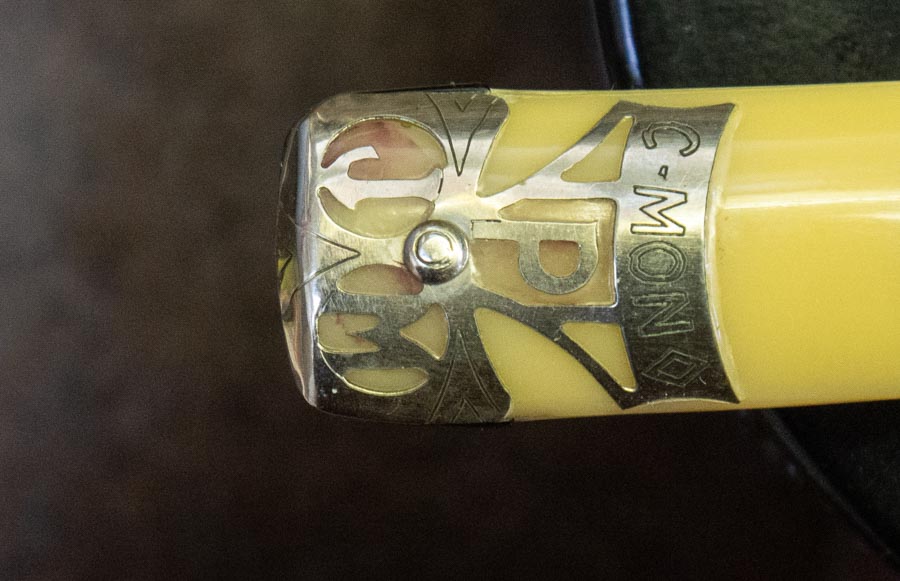 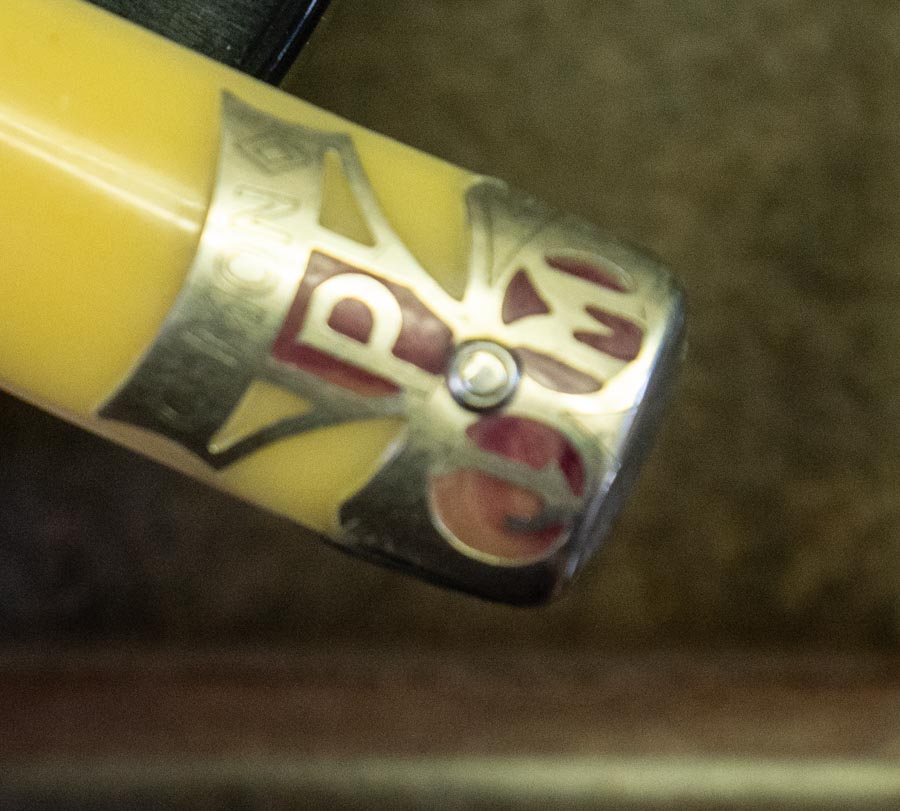 What a pretty razor this must have been with the gold wash, red triangle on the shank. and multi-coloured inset on the scales. It's like looking at an old imagined grey dinosaur versus one newly re-drawn with coloured feathers.

C-MON was the brand used by Carl Monkhouse to market his razors. He opened for business in 1912 in Solingen, but moved to the USA in 1937, setting up in Allegheny, NY. Most of his razors were actually marketed by Peter J. Michels of Brooklyn, and the scales were made with the initials PJM in inlaid nickel steel. By the way, you might compare the scales with those used by Dubl Duck - almost identical and undoubtedly made by the same supplier. This razor is stamped C-MON Wedge on the front of the shank, and Peter J Michels, Brooklyn, NY, Made in Germany on the reverse. So we know it was made before 1937, most likely in the late 1920's or early 1930's.

The blade is 5/8", spike pointed and a lightly hollowed wedge. Like all wedges it is stiff and shaves silently. It's a shame I don't have a way of describing the sensation of being shaved adequately. This is a narrow stiff wedge blade. It shaves exactly as one would expect: it quietly goes about its business, shaving painlessly but not quite as close as a fully hollowed blade on one single pass. Anyone who owned this as his only razor could have been proud of its looks and its shaves. I shall order up a couple more felt pads for the Dremel and see if I can't make the front of the blade as shiny and perfect as the reverse.
"Je n'ai pas besoin de cette hypothèse."
Pierre-Simon de Laplace
Top

Nice work. This razor deserves to be refurbished and used.
Gary

Do you have a 6 inch buffing wheel ?, it will remove steel much faster than a dremel, there are many different abrasive wheels and smaller 4 inch ones that also take a block of compound, saves a lot of work and leaves a superb shine.
Top

Sadly a decent workshop has not been something I've ever had, and I guess I'm not likely to have one now.
"Je n'ai pas besoin de cette hypothèse."
Pierre-Simon de Laplace
Top
Post Reply
6 posts • Page 1 of 1