In other words, fruit buns using yeast dough and lots of spice. Once upon a time a staple for teatime in British railway dining cars, served toasted with lots of butter (ignore the otherwise very nice man saying something about strawberry jam in the video). Here's my effort cooling down and in half an hour they should be ready to slice and toast. 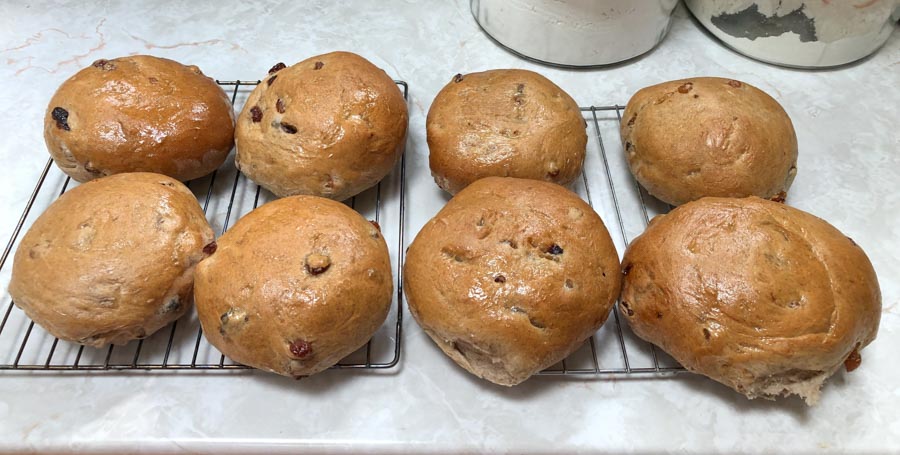 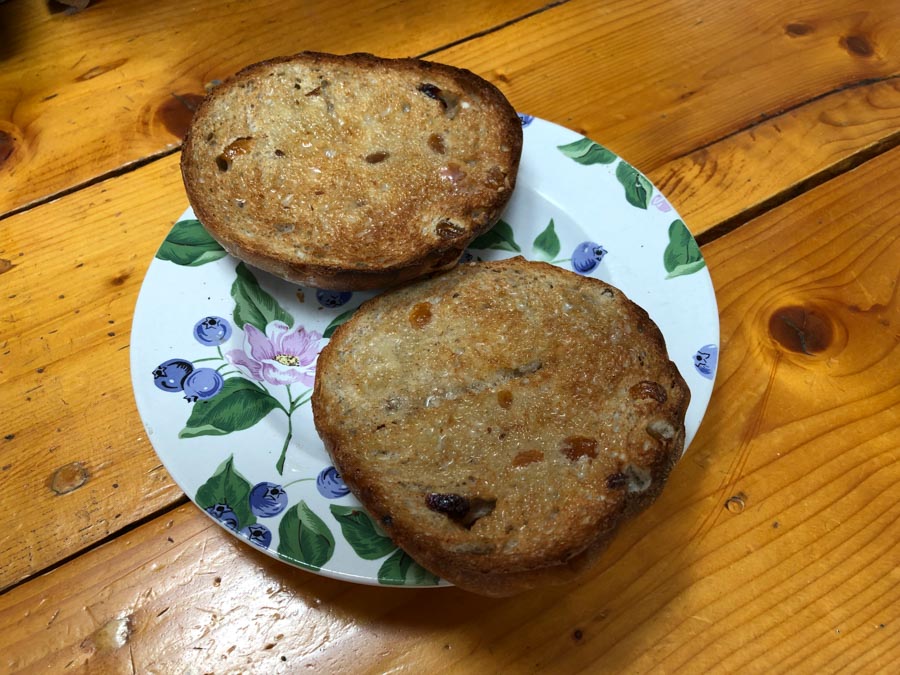 Made according this gent's recipe, which is better than the one I used previously. Lovely Durham accent by the way (I guessed his origin and he told me I was ten miles out!), just like my maternal grandparents.

One of the best ever, I'd bet!
Gary

Great video and they look scrumptious. I bet they would go good with coffee as well.

Those do look good and like they would go very well with butter.

I love (English) teacakes. My mouth is watering just looking at your photos. Must convince SWMBO to whip up a batch soon.
Bryan
Top

@ DrMoss - they look wonderful, can you email me some?

Skackskin here's my only reply.

In truth they are teacakes only in that they are served at teatime.

And for those who aren't sure, traditionally teatime is a roughly 4pm affair, with tea, maybe some small sandwiches, and cakes. It's to keep you going until you eat dinner in the evening, or the gap from luncheon to dinner would be too long. Not to be confused with a 'high tea' which is more substantial, and often includes a hot component, frequently something hot on toast like pilchards or baked beans. In households where dinner is served in the evening, a high tea or nursery tea is given to the children before they go to bed, thus leaving the way clear for the adults to enjoy dinner unmolested by their offspring. However, all this goes out of the window if you are not of that class. Working people eat their dinner at noon, have tea (of the 'high' kind) in the early evening and that's it. Priestley once said that England is a country where no man can open his mouth without making someone hate him. He referred to regional accents and their class implications, but just asking anything about your meals labels you just as much. What you call them, when you eat them, dishes served, and even the cutlery used all label you. It is said that England is becoming less class-ridden, but all that means is that the markers have become more subtle. The above information was accurate up to about 1970. Since then everything has gone to the dogs. The Big Bang in the City, followed by Blair, and policy changes in BBC announcers' ability to enunciate has ensured that you will meet shameless Estuary English in the most surprising places, and everyone eats tapas and antipasto rather than teacakes.

My wife’s a good Hampshire lass and loves her lardy cakes. Chris, you must have a recipe for lardy cake; it’s somewhat similar to teacake
Last edited by Rufus on Mon Aug 12, 2019 4:31 am, edited 1 time in total.
Bryan
Top

I'm from Wiltshire, so I grew up on lardy cake! (And pork pies, sausages, black pudding and proper bacon). Calne was the centre of the pig world, though Bowyers were based in Trowbridge. I don't normally get to use lard in cooking, as the Boss is a vegetarian, but I do have some for shaving soap. I'll poke around.

drmoss_ca wrote: ↑
Mon Aug 12, 2019 4:08 am
I'm from Wiltshire, so I grew up on lardy cake! (And pork pies, sausages, black pudding and proper bacon). Calne was the centre of the pig world, though Bowyers were based in Trowbridge. I don't normally get to use lard in cooking, as the Boss is a vegetarian, but I do have some for shaving soap. I'll poke around.

This one looks easy.

With the Boss being a vegetarian so much the better: you can make a batch for yourself and pig out (pardon the pun) all on your lonesome.
Bryan
Top

She's away at some conference next week so I'll plan to do it then. I left Wiltshire when I was 18 and haven't had lardy cake since. What shall I do if I find I can't live without it any longer?
"Je n'ai pas besoin de cette hypothèse."
Pierre-Simon de Laplace
Top

@Dr Moss - what ever happened to the King's English that I learned as a native Californian? Has it been as corrupted just like American English?
Top

It's a complicated story. Ever since 1066 the ruling classes have spoken differently to the masses. Whilst Norman French (itself a mix of Frankish and Norse from Viking invaders) and Saxon have blended, along with the Norse influence of our own, the tradition of 'speaking proper' has been continued in a class-conscious society. There was always a tendency for people to want to lose their regional accent (think of Pygmalion/My Fair Lady) if they wanted to get on and rise in society, though, notably, wealthy northerners proudly refused to adopt southern speech, and consequently were always kept at arm's length.
This was codified when 2LO started broadcasting, and when it morphed into the BBC it was taken for granted that announcers must represent the way things ought to be done. Not only did this mean speaking with a Home Counties accent - the Home Counties being those around London; Bucks, Herts, Middx, Surrey, but not really Essex or Kent - but was extended to wearing a dinner jacket and black tie when on air. This provided a national example of how one ought to speak and sound, rightly or wrongly, if you were to be perceived as belonging to the establishment. This was known as Received Pronunciation, or RP. If you have heard clips of the Queen speaking when young, you will have heard an even more rarefied version of this, though she has thought it best to tone it down in later life. In the late 1990's, the BBC policy was abandoned, and regional accents encouraged. By dint of numbers, plus the situation of the Beeb in London, this has come to mean a predominance of London (very few Londoners are Cockney, and none speak like Dick vanDyke), and Essex accents. The outflow of Blitz-unhoused people from the East End into the purpose-built new towns of Essex has changed the Essex accent into a hybrid with Cockney. There were new towns built in Surrey, Hertfordshire, and even out to Wiltshire, where Swindon was tripled in size with post-war housing for the London overflow. So the BBC started to employ people who mostly sound alike, with the loose-mouthed careless speech of east London, now generally known as Estuary English. The influence this has had is stunning to someone like me, who left the UK in 1985 and has been back only occasionally. Like the frog in the boiling water, the English haven't noticed (just as they are surprised to hear that the roads are busier than they used to be), but it is a shock to hear everyone speaking as if trying out for a role in East Enders. If the BBC announcers tork loike it, 's'OK wif me, mate.
Now let me be clear about one thing. I don't mourn the passing of RP as a ticket to social climbing. I love regional accents, and was born in a place that gave me a childhood accent that my northern parents and brother laughed at. I sounded like a yokel from Far From The Madding Crowd, and still can. I decry the loss of regional accents that are being wiped out by the dominance of Estuary English. A couple of weeks ago I was able to compare a sixty year old Sussex man with a couple of youngsters. You'd never guess they came from the same place. It's the coming uniformity I don't like. Ideally, we would have a variety of local accents, dialects and vocabularies, with RP as a lingua franca, to let the Cornishman speak with the Geordie. But there again, we can't live in the past as much as we would like it. Sic transit, as they say on the underground.
"Je n'ai pas besoin de cette hypothèse."
Pierre-Simon de Laplace
Top

Chris, I'm fascinated by language development/evolution, so your post truly held my interest. I knew about RP, but the rest is new to me. Thanks for going to the trouble to write out this synopsis of modern British English for the benefit of your fellow (largely American) SMF members.

Bryan, I'll accept your correction on British English. "English English," though more accurate, sounds awkward, and yet it is sometimes necessary. I don't think the word "English" by itself is automatically understood by the generality of English speakers to mean "English as spoken in England."

I have lived in Brazil and in Portugal, and I speak Brazilian Portuguese and Portuguese Portuguese (or perhaps "Continental Portuguese"), and this terminology, as inelegant as it may be, has been necessary for clarity.

- Murray
Give me Soap or give me death!
Top
Post Reply
34 posts