This week's interesting razor is a frameback, which is probably a term unfamiliar to many of you. These razors have a two part blade, with the spine being thick, and the blade itself is flat and sits in a groove in the spine. It's said they were a response to the first hollow grinds, by manufacturers who could make wedges but did not yet have the equipment or the skilled workers to make hollow grinds. While that might be true, they also make for a much cheaper razor that shaves as well as a hollow grind, which might be why this specimen comes from one of the most respected names among Sheffield razors. 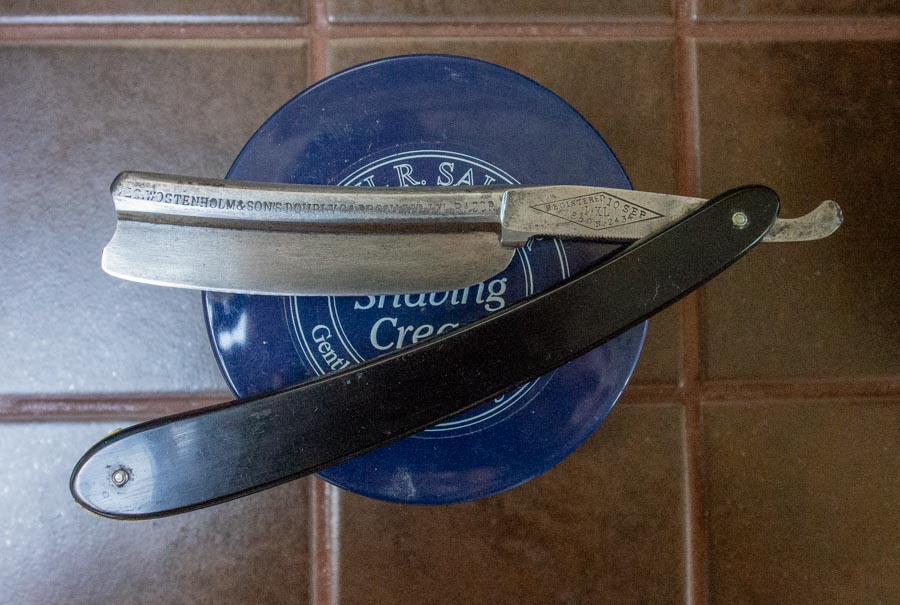 Very early framebacks had the blade, shank and tang all in one piece, with a spine sitting on top of the blade. The thin shank and tang made for a flexible and hard-to-hold razor. Next, like the example here, the spine, shank and tang were made in one piece of thick metal, and the blade slotted into the spine. Eventually, the blade was made removable, with a little set screw to hold it in the spine. Some theorise this allowed an owner to have several blades and to change them as needed, but I think it was just an alternative way of holding the blade in the spine.
After last week's diversion into metallurgy, I hesitate to do it again, but since I have prepared the ground... "Doubly Carbonised" - what does that mean? I mentioned last week that one way to make steel is to take extremely low carbon wrought iron, and heat it packed in charcoal in the hope the carbon will infuse the metal in a process that sounds suspiciously like case-hardening. I guess you could do it twice. Whether the blades were made this way is beyond me. Frankly, I'm more surprised someone thought that potential buyers might have any idea what carburization was, though maybe it was just blinding them with science. The wording is stamped a bit crudely, but then if framebacks were made to be cheap that's no surprise. It is interesting to see Wostenholm and Doubly Carbonised being stamped on the spine, but that's probably because the shank is occupied by the I*XL trademark with the rather helpfully specific date of 10 Sep 1850 within it. I know Geo. Wolstenholme operated from ca.1785 to 1847 at the Rockingham Works in Sheffield, moving to the Washington Works thereafter. At some point he dropped an 'l' and an 'e' from his name to fit better on his knives, becoming Wostenholm. In 1831 he started using the I*XL trademark, which had first been registered in 1787 (by William A. Smith), and which I believe is a rebus for "I excel". What exactly was registered on 10 Sep 1850 is unclear to me; certainly not the I*XL mark. We know from the stamp this razor was made after 1850, which surprises me a little; Wostenholm was making hollow razors by then but the framebacks appear in his catalogue for years afterwards - they must have either had a loyal following or perhaps it was on grounds of cheaper purchase price.
Anyway, let's get down to details. This is a lightweight razor given the lack of metal in the blade. Ox horn scales with brass pins and washers. The blade has not so much a smile as a broad but lop-sided grin (one that says 'I bet you can't get me sharp!'). The spine is also curved, and they have gone to the bother of recreating a barber's notch by having matching concave curves on the end of the spine and the point of the blade. There is a crude machine head on the very stubby (old fashioned) tang. In fact, the overall design (curved spine, smile, barber's notch and stubby tang) speaks of older razors. I suppose they never saw reason to make it look more modern when it was being retained in the catalogue to satisfy the dwindling demand of buyers who preferred to stay with a frameback. 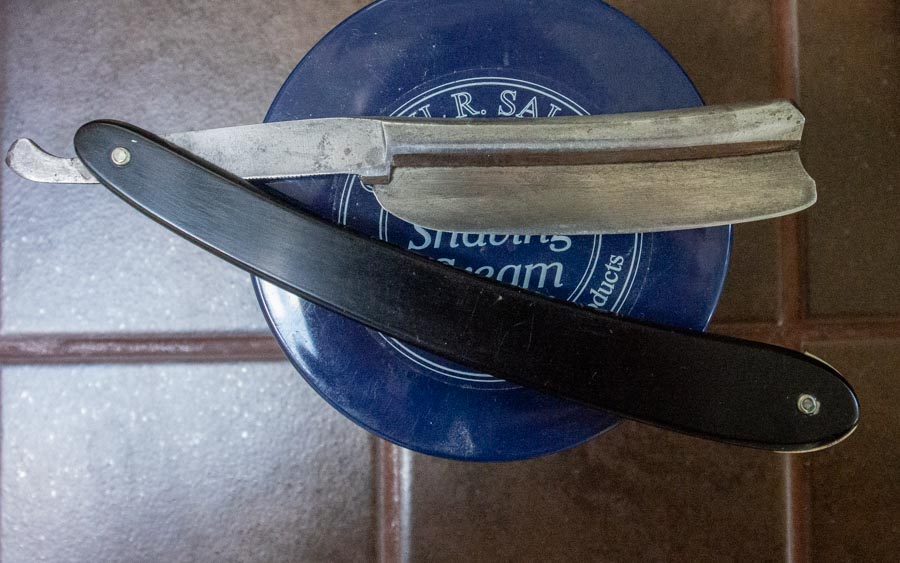 There's some patina on the razor, but nothing beyond superficial staining that would rub out with some metal polish. Honing it is very easy - another advantage of a frameback with its thin flat blade. I used my usual process of 2k-lapped Norton Arkansas, Suehiro Gokumyo 20k, Escher then a little green paste, followed by canvas and red Russian leather stropping. This one has a little hone wear on the spine, and it's possible the edge wasn't quite so curved before it spent the last 160+ years being honed! Shaving with it is quite an odd experience. The very thin blade gives a very different kind of feedback as it cuts, but does not 'twang' as it does so. The with grain downwards pass didn't seem that effective, but a cross grain pass leaves a very smooth face and no irritation. One could certainly use this as a daily razor, though I prefer a thick and heavy blade. I can see that for the ordinary user, the reduced price, and ease of honing, could make such a razor a very reasonable choice. I think it's time for a modern manufacturer, or even a custom maker, to bring back this style of razor!
"Je n'ai pas besoin de cette hypothèse."
Pierre-Simon de Laplace
Top

Very nice. I think I could go off the deep end with framebacks.
Top
Post Reply
3 posts • Page 1 of 1